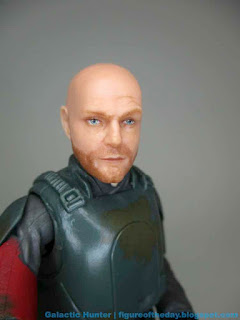 Bio: A hot-headed ex-Imperial sharpshooter, Migs Mayfeld was once the leader of a gang of criminals. Mayfeld's skills and old ties help The Mandalorian on his mission to rescue Grogu from Moff Gideon (Taken from the packaging.) 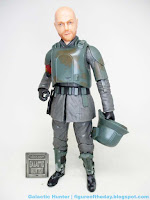 Commentary: I think this is the first time a stand-up comic whose record is in my bins has been turned into a Star Wars toy. (And I thought the honor would've gone to Brian Posehn.) Migs Mayfeld (Morak) takes the mudtrooper Han Solo body and adapts it to this new character. Hasbro has been expertly retooling and tweaking figures to make the most of existing assets for years, often coming up with very good releases that definitely work as close enough - and this is one of them, with one little problem. The arm.

Bill Burr's head is seen here with a shaved head and a good amount of scruff Weirdly packaged wearing his helmet, the bright-eyed ex-Imperial sniper looks really good. I don't know why Hasbro decided to hide it - the newly-tooled helmet is no slouch either. At first glance this figure looked like a Rogue One-era redeco, but now. It's a Solo redeco, minus a lot of the "redeco" part. 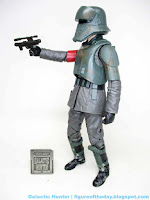 I'm being a little unfair, but this is one of the few times Hasbro could've made a better figure by saving some money. The 2019 Han figure had a lot more accessories for less money, but also a lot of paint applications. This new figure uses that same body, changing up the battle damage a bit and changing the scuffing slightly. Most of it appears in similar positions - no big deal - with minor modifications. The one place it really fell short was the right bicep - you'll notice Mr. Mayfeld has a red armor piece with three yellow squares. The element on the TV show was devoid of such hues, and a plain grey arm would've been more accurate. (Weirdly, Mando does have a red sleeve.) Sticklers for on-screen accuracy should probably hope Hasbro does Mando in this costume and screws it up too - maybe a simple head or arm swap could result in better figures down the road. 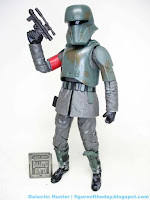 There are always going to be concessions when you make a new figure from existing tooling, but the paint job shouldn't be one of them - Hasbro could've got this one right and saved some money at the same time. I still like the figure because of what it is. If I didn't collect Star Wars I'd probably be amused enough by a Bill Burr toy that I'd want to buy it anyway - it's a good likeness and a nice trooper with a blaster that fits in his holster. Maybe we'll see a fixed variant some day. but until then I can only say that this is almost a great figure. The sculptors did a wonderful job on the new head, and it looks great on the old body. The scuffs are nice! The blaster is fine! The helmet fits just fine. They just need to fix the arm.