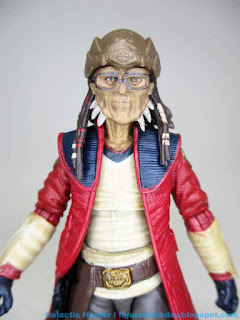 Bio: A former colleague of Jango Fett, Hondo Ohnaka won fame during the Clone Wars when he kidnapped Count Dooku, Obi-Wan Kenobi, and Anakin Skywalker, and tried to ransom all three for a big payout. (Stolen from the marketing copy. There is no bio.) 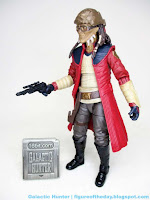 Commentary: This Hondo Ohnaka was sold both as a The Vintage Collection release and a Millennium Falcon pack-in. (The one you're seeing in the pictures came from the vehicle.) This figure came out two years ago and was a royal pain to find - but should probably be appealing to fans of The Clone Wars, Rebels, and the theme parks. this figure seems to be a mirror-flipped version of the theme park design, which itself was based heavily on The Clone Wars version with the fancy jacket. The 6-inch figure is remarkably similar, with less-saturated colors and the holster hanging over the left hip. I can't explain it. This 3 3/4-inch figure seems closer to the overall look of the Disney costume, minus the holster issue. 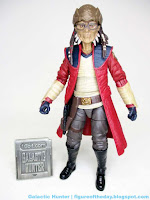 I have no idea why this was put on a Star Wars (1978-1979-style) cardback rather than something specific to the park, or The Clone Wars, but I assume you can blame Disney. I mean, it's just a good place to start at - they approve this stuff. Th figure's flowing coat si sculpted to make room for his holstered blaster, plus it's open so you can see his legs - and so his hips can swing forward. The bend-and-swivel wrists are good, the boots look nice, and his pirate symbol - hard to see as it may be - appears on both his cap and his belt buckle.

Hondo's sculpted outfit is great - the shirt is tighter than on the Disney robot, and it looks better. The bright red jacket's texture is wonderful, with lots of wrinkles and unique ornamentation on the back that is probably better described by someone with the vocabulary to describe clothing. "It's neat" doesn't cut it, but it is - and the lapels look marvelous. On his forearms are some swell vambraces, but they seem to lack the electronic doodads we'd come to see on Rogue One and The Clone Wars characters. They just look like he slid them over his coat sleeves, and they're fine. The gloved hands? Also fine. What really stands out, though, is his wry smile and his mischievous eyes behind his (oddly lensless) goggles. These may distract you from other details, like the panted rings in his braided hair. Hasbro did a nice job with this one. 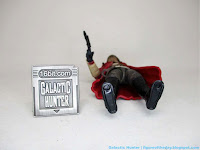 The hat is a separately molded piece, but it's not an accessory - the only thing meant to be removed is the blaster from the holster. It fits! It fits in his hand too.

While I did find the bend-and-swivel hips a little stiff (as many of this style are), I love the figure's detail and personality. He just looks like he's up to something, in the grand tradition of alien scoundrels like Quark. (And who doesn't love Quark?) If you can snag this figure for a fair price, you should.

Collector's Notes: I got mine from Entertainment Earth. And the one from the vehicle came from Target.