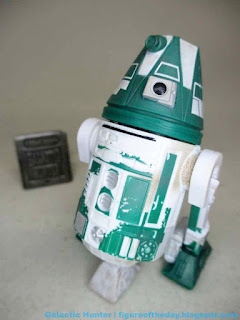 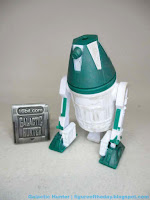 Commentary: Oh, you better believe we've got a lot of droids on deck. G4-5B is a curious one on so many levels. If you like green robots, we've had a bunch - Hasbro put out R4-J1 in 2008, Disney had a couple of part bin R4 green robots, and there's a color-change one too.   You probably have one or more droids that look a lot like this.

The patterns and colors, while familiar, are all different.  The green has a bluer tint to it, and this particular hue doesn't closely resemble anything I had in my visible droid pool. (It's a lot of droids, I may have missed something.)   It's still green, and you have green, but at least it's a new green. 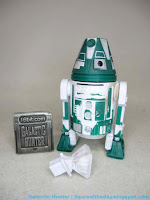 The pattern on the droid is new too - you can see a white body with neat green markings, green feet, and some light wear on the droid's person.

There's certainly a weird contrast at work here.  You have a snow white, bright body that has some dirt on it, and there's no way a dirty used droid should have factory-white plastic on it.  It's certainly visually striking, but it doesn't make a lot of sense - Hasbro's R4 worn droid from 14 years ago looked a bit more lived-in. 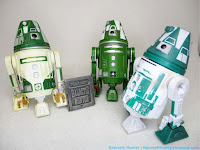 Having said all that, I still like it.  It's familiar, yet different, which seems to be the mantra for Disney Star Wars these days.  As a mystery box droid it's fine.  It's not amazing, and you've got a lot of options, but I like it enough.

Is this the correct article? It describes a gray droid, while the phots are of a green one.