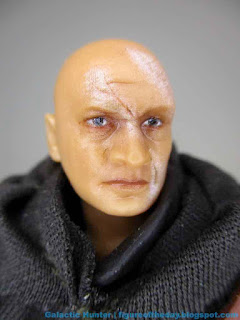 Bio: Once regarded as one of the most fearsome bounty hunters in the galaxy, Boba Fett seemingly met his demise in the Sarlacc pit on Tatooine. A survivor to his core, Fett lived to fight another day. (Taken from the packaging.) 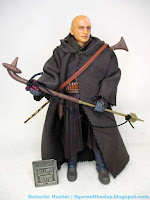 Commentary: In the 1990s, your head would have exploded if you knew you may some day own a figure like Boba Fett (Tython). A being forged of pure marketing genius and disappointment, a generation of fans was told that this was the most important bad guy ever - and then he was little more than a glorified extra in a couple of movies, which resulted in demand for comics, novels, action figures, and more. And because of all the hype during the Carter administration, subsequent generations also believed the armored baddie was the coolest guy ever, and now he has his own TV show. Well, theoretically his own TV show. 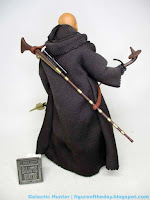 A re-armored Boba Fett is coming as a Walmart exclusive next year, and it looks like that figure is made of a mix of this figure and Cobb Vanth. (But I could be wrong.) Vanth's helmet fits on the unmasked head just fine, but I am a little sour that the head sculpt on Tython Fett is all nice and clean. He looked like hell when we met up with him, scarred and almost like his skin was an unwrapped mummy. Having said that, it's a nice looking head - it just needs some more paint. The sculpt and expression are great, it's just missing a final layer of make-up.

The robes are a mishmash of Darth Maul-adjacent Sith robes with elements of the Tusken Raiders - which we saw on the show. He has these amazing pants with well-hidden knee joints that don't seem to be restricted in the slightest. The gloves look great, the pants are good, the boots and ammo belts are nice... it's a shame there's just so much to love under the cloth robes. You may never see it. There's even a blaster with a holster under there. 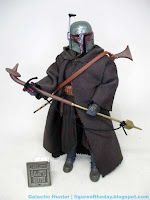 While some will undoubtedly feel slighted to see Boba Fett without his helmet - or armor - this is a good representation of a neat figure. (I'm also in the tank for more Tusken toys, so.) He has a big custom gaffi stick, a cool rifle, and unique robes that are probably better than we've had for any Jedi figure. Given that the big combo meal at Raising Cane's Chicken Fingers is $14 now, $23 doesn't seem like too much to ask for this much plastic (and cloth) in a package with a nice face paint job. Hasbro clearly saved a few cents on the lightly-decorated robes under the cloth piece, but it's still an impressive figure. Unless you're over Disney-era Star Wars (or live in a future with a 3 3/4-inch version), go get this one.

Would love to see a photo without the robes...if they're easily removeable?