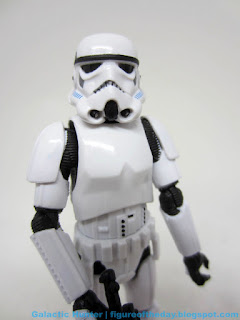 Bio: Stormtroopers, nicknamed "Bucketheads," were the elite shock troops of the Galactic Empire. As members of the Stormtrooper Corps, an independent branch that operated under the Imperial Army, they served as frontline assault forces and formed the backbone of the Imperial Military.  (Stolen from Wookieepedia.  Packaging has no bio.) 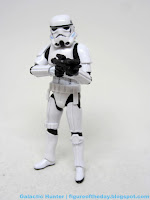 Commentary: We've had various flavors of Imperial Stormtrooper over the years, generally creeping closer to perfection.  Around 2007 they started to get really good, with tons of articulation and a removable helmet. Also they were prone to yellowing.   This new 2019 version seems to have thrown out any and all old parts to give us a more robust Rogue One take on the 42-year-old trooper design, complete with the newer blaster from the more recent movie.  It's good.  It's not perfect, but you'd buy 60 of them if you could. 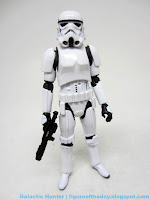 The blaster has a silver mark and that added scope dongle on the side, but other than that it's a normal trooper rifle.  The figure itself seems to be new as Stormtroopers go. Oddly Hasbro didn't give us a holster for the blaster or any removable belt-mounted accessories, but there's a lot more detail and articulation here.  It feels like the "person" in the suit may be taller, as there's more room around the knees and elbows than usual - you can see a lot more black, which barely increases the range of motion in these limbs.  Wrists bend and swivel, ankles don't rock, and the shin armor is a bit bulkier than I would like.  You get the thigh-swivels that Hasbro has been including since Rogue One, and that's a huge plus.   I love that they painted the grenade on the back of the belt, as usually this goes undecorated.   All of the dots on the belly are also painted, and the helmet seems completely decorated consistently with other figures of this size.

What surprised me the most was how the head was built.  The body has a real neck for once, complete with the ribbed neck collar we've seen since the original movie.  The figure eschews a round peg on top for a hole - the peg is inside the helmet this time! This changes up its ability to move and gives it a more realistic look.   It may also future-proof the mold to look good when any hypothetical "Stormtrooper Disguise" figures come out later, but seeing how we just got Han I doubt it'll be for a while.   Go ahead and get yourself at least one of these, just leave some for the rest of us.

This is a nice looking Stormy!