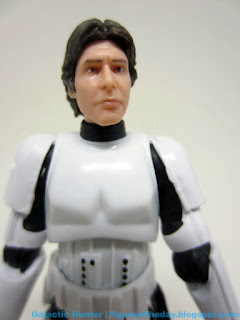 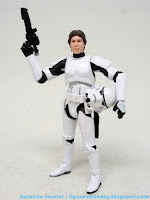 Commentary: This is a big improvement.  Han Solo (Stormtrooper) gets his first-ever Kenner-branded release as one of the real shining upgrades of exclusives.  The helmet is shiny and the proportions seem better - the forehead band isn't touching the eyes. It's shiny.  It's wider.  Han's head may be a new sculpt - the hair is a separately molded piece glued down, and the face has that wonderful printing tech on it.  This is one of the best Han Solo heads I've seen at the size.  You probably need this figure.

The body is a mishmash of existing parts.  Compared to The Legacy Collection Han Solo - the last movie super-articulated figure from 2009 - there are a bunch of changes.   The stomach dots are now painted.  The grenade on the back of the belt is non-removable.  The hips are the Sandtrooper joints with lateral movements.  The rest of the articulation is par for the course, complete with 2009 copyrights on the shoes. Oh, and that holster? Still trash. You can't get the gun in there despite it being molded in the shape of the gun. I assume it's the paint.  The blaster  has a lot of paint on it though, and that's a big improvement. 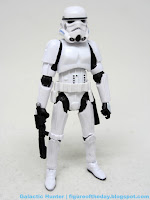 Normally I gripe about a $7.99 figure returning as a $12.99 figure.  Hell, I'll still complain about it - but after 10 years of inflation and massive improvements in the Harrison Ford portrait, I'll endorse your spending $13 on this.  It's a premium over inflation, and I'm sure some of that is because Hasbro knows you will pay a premium for black and silver packaging, but it's good. Hasbro knows it's good.  You know it's good.

Collector's Notes: I got mine from Target.   It's in the men's clothing area.  Because Target hates collectors.