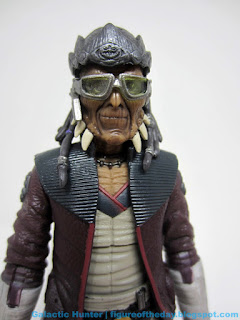 Bio: Hondo Ohnaka is a Weequay pirate turned legitimate busines man... most would just call him a smuggler.  A rough-around-the-edges rogue, he would gladly sell his grandmother if there was money in it.  He is ostensibly on hte side of the Resistance, but he is first and foremost on the side of Hondo Ohnaka.  (Taken from the figure's packaging.) 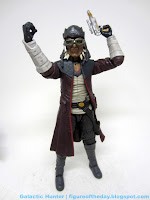 Commentary:  One of the things I thought would be cool - but never expected to see - was a 6-inch Hondo Ohnaka figure.   He was awesome in The Clone Wars and Rebels as a character not unlike Quark from Star Trek: Deep Space Nine.  He's basically evil, but you like him anyway.  He should probably be in prison, but you're still more or less hoping he wins.   While the figure borrows from his previous costumes on television, the outfit is pure theme park robot.  It's certainly close enough for fans of Hondo, but there's still room to do the two classic costumes if Hasbro ever got the bug.  I assume as fans of The Clone Wars get a little older, that's something we're likely to see demanded more and more.   Maybe we'll even get a whole retro line in 10 years! But I digress. 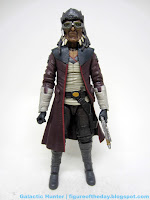 For those of you who make it out to the very expensive theme park - and I hope to at some point in the next 5-10 years - you can get a boxed set of 3 full figures and a sidekick for about $70.   The only 100% new figure in this 3-pack is Hondo, not as brightly colored as he seems to be in the photographs from the theme park.  There are a lot of undecorated details on the figure, like the lining on the back of the gloves and the almost completely undecorated boots.  Thankfully Hasbro put their pennies on the head and coat, so  you'll see lots of wonderfully painted detail - just not as much as you might hope from being asked to re-re-rebuy another Rey figure with new face paint.  (Seriously, this is at least the 4th release of that mold.) 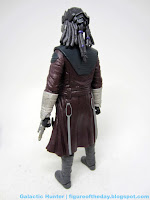 A little extra paint below the waist would be nice, but it's worth noting what Hasbro did very right.  The goggles are nearly perfect. The hat and face are excellent, with a winning smile the likes of which we rarely see adorned with long, cleanly-painted horns hanging off the jaw.  The long hair hangs below the hat, adorned with clips that don't quite match the robot but still look excellent.   The textures on the coat are remarkable, from the lines on the collar to the faux-leather on the chest.   The shoulder patches and gauntlets are no slouch either, delivering a figure with enough Star Wars Neuveaux elements that you would be forgiven for assuming this was a design taken straight from the TV shows.

The blaster fits in the left hand or holster without a fuss, and the range of motion on all the joints is on par for a figure of this size.  It's worth noting there are thigh cuts, the left one of which is hindered by the holster that restricts its movement.  I know a lot of fans adore articulation, but when it serves no function it just adds to the cost of the figure.   They could have left the thigh cuts off, but it's there for the customizers.  It's also nice to have highly expressive articulation in the arms joined by double-knee joints and rocker ankles, giving the figure considerably more personality than almost every single 6-inch figure that came before him. 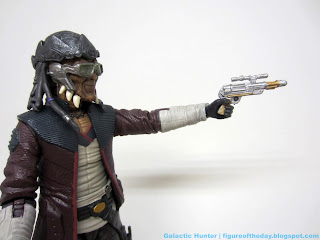 As silly as this is to say, I'd probably pay $70 to get just Hondo.  I suppose technically that's what I just did - I didn't need another Rey or Chewbacca, and while the Porgs are different I doubt your average fan will find them quite as worth the purchase.   I'm glad to see Disney build on and develop some of the extremely fun and enjoyable elements from outside the original trilogy.   I'm elated we got him as a figure - although it would have been nice to get him by himself, and at a lower price.   If you're the kind of fan who has bought a boxed set for just one new figure, well, you know the drill.  This is a new sculpt, this is a character that rarely gets toys, and odds are you know you want it.   If your budget allows, get this figure when the opportunity presents itself.

Collector's Notes: I got mine from my pal Shannon who went to Disneyland's Galaxy's Edge a few days ago.