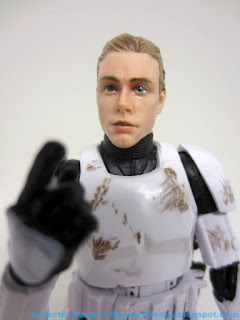 Bio: In a brave attempt to rescue Princess Leia Organa, Luke Skywalker disguises himself as an Imperial Stormtrooper and infiltrates the detention center of the Death Star.  (Taken from the figure's packaging.) 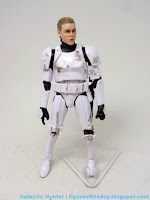 Commentary:  2019 seems to  be the year of the rerun.  Hasbro has done well to enhance previous releases, but Luke Skywalker (Death Star Escape) is a figure from a few years ago with an all-new head sculpt and some added paint, plus a clear display stand.   If you missed him before, there's a lot to like about this one.  And if you didn't, well, you can get this one and just leave the helmet on the old one - and pretend he's a basic Stormtrooper.  Target's exclusive - displayed in the men's clothing department at some stores - is a worthwhile upgrade.

Also, this figure was teased a while ago - the slicked-back hair was previewed in a diorama at HasCon 2017 and never really discussed again.  You can see it in our Galactic Hunter coverage.  The armor lacked the dirt, but the face was painted really well and now in 2019, the new realistic face paint is trotted out for mass-production.  While the lips may be a little dark, it largely does a good job capturing the look of the prototype.  At certain angles, it looks just like Mark Hamill.  In others, less so.  It still looks a bit better than the bushier hair of the previous release. 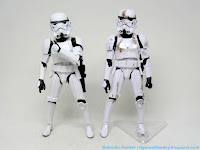 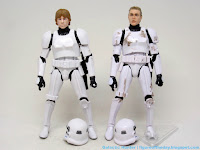 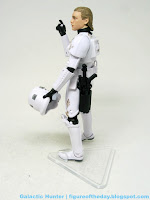 Like the previous release, Luke is indeed a little short for a stormtrooper.  The torso is smaller, with the chest armor hanging over a smaller lower torso piece.  You still get the belt with the commlink clip and blaster holster, complete with the retooled backside showing the changed gear compared to the normal troopers.   The arms and legs are pretty much standard trooper fare, but the entire figure is molded in a brighter, glossier white plastic than before.  It looks like a better figure, and has added grime from the Death Star compactor.  As just plain troopers go, it would be different enough to warrant your attention.  With an all-new Luke head underneath, it's impossible for me to ignore it.

It's different enough to be of value.  I appreciate changes to troopers - especially improvements - when you can just keep your previous release as an army-builder if you're so inclined.  It's a worthwhile upgrade that takes advantages of the need for new figures and improvements, while not completely negating the value of the figure you may have already bought.  Of the two, I would say this is the clear winner.  If you can score it at a fair price, you should.