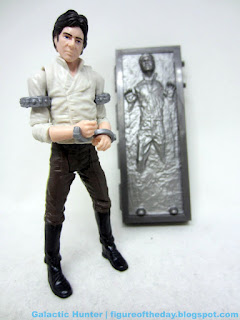 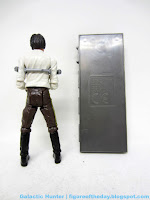 Commentary: This is a rerun barely worth mentioning.  Han Solo (Carbonite) gives fans the demanded token rerelease of the figure on a Vintage-style cardback, which makes it a required purchase for old-school fans who didn't get a carded one from 1984-1985 back when they were affordable.  It's not on a tri-logo or Power of the Force package, so this is sort of its own thing - not a real remake, but something else. Much like the tri-logo release, the block is packaged behind the figure and just like 2015's Black Series release [FOTD #2,168] with a couple of minor changes.  You should probably read that review and come back here for changes.

Han is notable in how he's not changed in any significant way.  Other contemporaries of this figure were rereleased with that "hyper real" paint job - amazing, intricate face painting that's generally a big improvement over their last release in the previous 10-15 years.  Han had no such changes, at least not yet.  It's the same plain face we got in 2015, with the same middling handcuffs and arm bars.  He has the same articulation, the same sculpt, and despite being from Return of the Jedi, his hair looks a lot more like his pre-freeze self.  A new head would've been really cool here, but Hasbro wants reissues so you get reissues.  It's acceptable, but if you just want this Han figure the previous release may do you just fine. 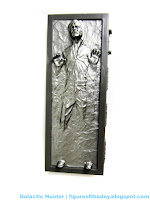 The Carbonite Block is changed, barely.  The back of the toy has been retooled to include a magnet that you can hang under the arch of Jabba's Palace Adventure Set, which is almost cool.  Almost.  the playset itself is the kind of thing collectors generally like, but repackaging Ree-Yees is another snore and for $50, more meat in the box would be nice - like a "melted" block accessory. That would have been most helpful.  The block's interaction with the magnet is tolerable, but the lever to raise and lower it is a little sticky.  This may catapult the block off the back, thus negating the value of the feature in the first place.  I'm glad they tried it, but a modification may be necessary to improve its function with the playset.

The block itself? It's pretty good.  It can't stand on its own at all, but it does have good sculpting and an excellent paint job.  Some of the lights, buttons, and switches on its left-hand side are decorated as is the silver on the front.  It's not just molded all in one color.  It sticks to my metal desk incredibly well, so there's nothing wrong with the block itself or the magnet inside it - it's just the one on the playset is kind of subpar.   As such I would consider this a pretty good upgrade, although I would appreciate seeing it improved with things like lights or sounds or the ability to shove Han Solo inside it.

With a repainted head (or Power of the Force cardback) I'd give this an A+ for effort.  As it is?  B+.  I appreciate the magnet functionality quite a bit, and returning the figure to the market during a time when the Sail Barge just hit was a great gesture to fans that may not have been great at keeping up in 2015 when things were a little slow.  Because you will want the playset and probably the cardback, you should go ahead and get this set.  However, you might just want to leave it carded if you have the 2015 release - you can always tape a magnet to your old block and keep this one pristine.  Hasbro was positively brilliant to put Walmart's exclusive vintage figures in a protective box (with a playset) to keep them nice and mint.

Collector's Notes: I got mine from Walmart.com.   It's a de facto online exclusive at press time, as most stores have largely excised new Star Wars from the shelves.