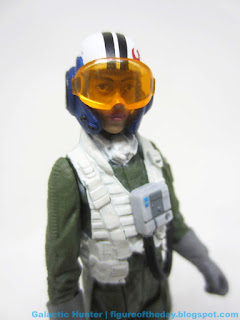 Bio: A longtime reliable starfighter model used by the Resistance that dates back to the struggle between the Empire and the Rebellion, the A-Wing is a nimble, wedge-shaped fighter propelled to incredible speeds by large twin engines. (Taken from the figure's packaging.) 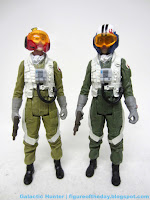 Commentary: There are complications, and there are complications.   This Resistance A-Wing Pilot is a variation on Resistance Pilot Tallie [FOTD #2,407] - it's a redeco with a new head.  Fun story I can't tell at length - this was not the original intended pack-in, nor did this item have a smooth ride to market.  There were rumors of where it would be sold, and changes, and other stuff - this was a toy that clearly did not want to get released.  It did eventually escape to closeout shelves, getting dumped at Ross for $7.99 despite another intended home for it - but that's a long story I can't tell right now.

The nameless dark green suited figure probably isn't meant to be Pammich Nerro Goode, and I am unable to find the identity or reference for the outfit in my limited resources on-hand.     The helmet is now in blue, with a darker orange visor, and a newly-sculpted head with a slightly different face and different hair coming out of the back of the helmet.  She has 5 points of articulation and a blaster, making this a unique character but probably not one you can name just yet.   The paint is nice and clean, it's unique, but it's not a character I can identify or point to in a book just yet.  Maybe you can.  I'm glad she got a new head, but it's not like I needed either this ship or its pilot. I'm just a sucker for A-Wings. 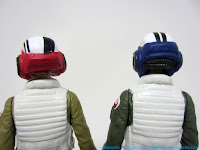 Force Link Notes: "Reporting in, Squadron Leader." "The enemy is on the move."  "I've located the targets."  "Concentrate fire on the enemy position."  With the ship, it's "Firmware update required."  Never change, Force Link 2.0.

Collector's Notes: I got mine from Ross.