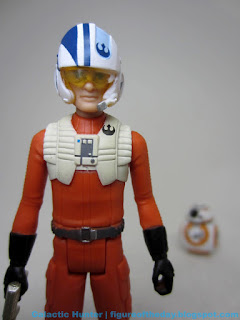 Bio: A hotshot X-wing pilot for the Resistance, Poe Dameron is a natural leader who keeps an eye on the crew of the Colossus. When Poe sets out on his own missions, he leaves behind BB-8, a rolling BB unit whose spherical shell is packed with useful tools and computer interface equipment, to work alongside Kaz and the rest of the crew. (Taken from the figure's packaging.) 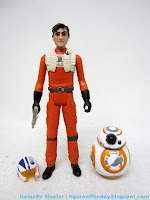 Commentary: Infuriatingly great.  That's Poe Dameron in a nutshell - the svelte 3 3/4-inch animated style figure is right in line with the 1970s and 1980s original Kenner toys in that he can stand, sit, and nicely fit in a vehicle.  Unfortunately this line seems to have come out the gate dead - there are no known vehicles, no known second waves, and no real reason for it to exist.

The proportions feel like a classic toy. The exaggerated face sculpt does a perfect job of capturing Poe's personality, without needing to be exactly like Oscar Isaac.   There are a few missing details on the figure, but that's typical - a yellow stripe on the helmet is gone, as are a few other markings. At this size it's unlikely to be noticed by the average customer, doubly so as there's no reference on the packaging.   It's worth noting the clear yellow helmet fits perfectly on Poe's head, as does the blaster in his hand.   It feels like after years of stumbling over things like cloth robes or plastic bits dangling over the legs, going back to the basics - non-fancy designs - was what resulted in the very best classic-style action figure.

The action figure line has been incredibly inconsistent since diverging a few years ago - multiple assortments with price points that are inconsistent with the amount of gear and articulation in the package around 2010 sure didn't help, nor did Hasbro's occasional desire to charge more for something while selling a similar product at a lower price.   $15 is a little high for this set - but it's a pretty good set.   With 5 joints and an above-par, toy-friendly design, I think old-school fans and kids will like this figure a lot.  Poe fits perfectly in the The Force Awakens/The Last Jedi X-Wing fighter toys too, showing that Hasbro and Lucasfilm are maddeningly close to a fun line for kids that never really seemed destined to happen.  If the price is right, go get this set - you'll love it.