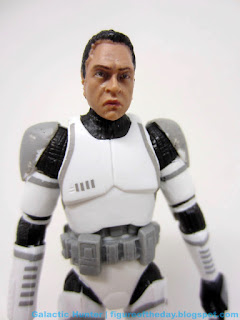 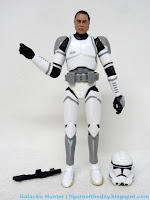 Commentary: Since this mold debuted with this deco in The Black Series, the 41st Elite Corps Clone Trooper has now been sold in at least three significant paint variations all over the world.   The 2013 US release was off-model, missing mot of the grey markings on the figure's shoulders, shins, and forearms.  The international release added black battle-damage, and the shoulders and shins.  The 2019 release adds more forearm markings, but removes the battle damage.  It adds a grey belt, but also incorrectly adds a grey belly paint application.  The 2019 version also has a "hyper real" face painted under the helmet, arguably making it the most accurate (but still incorrect) release.

What impresses me the most are how the 2019 release handles weathering.  Instead of black streaks, there are very subtle worn-off spots on the shins and shoulders that look like production defects at first glance.   The backs of the hands have similarly subtle markings.  The human head has more paint, with a more lively skin tone, painted lips, and glossy eyes.  The hairline is a smidgen off, you can see the borders of the hair were left flesh color.  Ew.    Thankfully you've got a Phase II helmet to throw over the head to hide the bad hair plugs.  Hasbro also painted the soles of the boots and added a little dirt to their sides - a nice touch, and very much appreciated given the price. 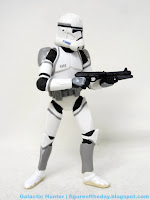 Articulation is the same as it ever was - good for the time.  The original from 2013 predates Hasbro's thigh-swivel joints, so you'll have to settle for acceptable ball-hinged hips that still allow for pretty good range.

Is this figure essential?  To me, yes - it's distinctive from the previous versions, including the international deco variant of the 2013 trooper you most likely didn't even realize that you missed.   I like the bend-and-swivel wrists as well as the not-bad-but-no-big-deal black blaster. Some silver would have been nice to bring out the detailing in the weapon.   All in all, it's a sought-after reissue fans have wanted with improvements on a The Vintage Collection cardback.  Hasbro ticked all the boxes here - nicely done, sirs and madams and gender non-conforming individuals.   This is a worthwhile upgrade and currently the definitive take on this particular trooper at this scale.