Bio: A longtime reliable starfighter  model used by the Resistance that dates back to the struggle between the Empire and the Rebellion, the A-Wing is a nimble, wedge-shaped fighter propelled to incredible speeds by large twin engines. (Taken from the figure's packaging.) 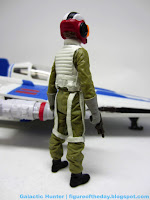 Commentary:  There are surprises, and there are surprises.   For years, few lines of figures incorporated multiple women in the line at launch - sure, there were a few, but rarely were they all new characters.  The Resistance Pilot Tallie joins at least two new Resistance members.   Tallie is in a green suit with grey gloves, but the most exciting thing is her new helmet - the visor is translucent, and not opaque like The Force Awakens' iffy helmets.  Which, for better or for worse, creaks open the door to revisit Asty, Poe, and Snap Wexley. 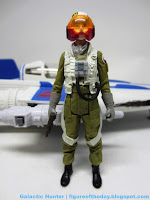 As usual, she has a blaster and 5 points of articulation.  She has no problems standing or sitting in her A-Wing Fighter vehicle, which I have to say is pretty awesome.   Deco is largely good, with painted buttons and most straps - sadly a strap between her legs is left undecorated.   It's that way on the box, too.  You'll also  notice she has a Resistance symbol on her shoulder along with painted code cylinders, a nice addition that could have easily been left off.   The green suit color is also quite nice.

Her Force Link quotes may or may not be in the movie - at this point we have no idea if this is an actor in the film, or a Hasbro or Disney employee just making sure the gimmick has some functionality.   When you shove her forward, you get blaster noises.   Her other quotes include "Here they come!", "Let's do some damage!", "Protect the bombers," and "Reporting in, squadron leader." 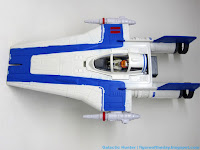 This is a perfectly nice figure, pretty good for a pack-in pilot and certainly unique in that this may be the first lady Resistance or Rebel Pilot to be packaged with a vehicle.  We had a Pilot Padme with a Naboo fighter as an exclusive ages ago, but rarely - OK, never - do we get an unknown lady character as a ship pack-in.  (Although we did come close in an exclusive that never got along far enough.  Wait for my book!)   I like the ship, I like the figure, it's a worthwhile purchase.