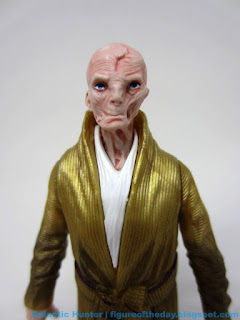 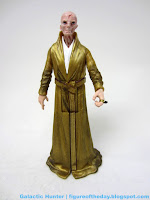 Commentary:  The funny thing about The Last Jedi is that it also seems to be drawing from The Force Awakens in spots, as that line was (and is still) filled with holes.  There are some major characters like Snoke we never got until now, also Luke Skywalker, also droids, also aliens, also... I could go on, but why?  The important thing is we now have our very first 3 3/4-inch Snoke figure and that dude is tall. 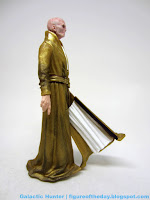 When it comes to figures like this, you have to ask if it's going to be better with cloth robes.  I'd argue that it wouldn't - the hard gold plastic looks better, flows better, and shockingly sits in his throne just fine.  After years of iffy Padme figures and dubious Jedi, I'm almost shocked that he just plain fits on his throne in the playset.  The unusually tall humanoid has a caved-in face, missing some teeth or jaw parts not unlike one Boris Karloff.  He's scarred, bald, and grotesque - an uglier Emperor in Hef's shiny pajamas.   With gold slippers.  And a big ol' ring, which is so prominent I have to assume it's a story beat of some sort.  The texture of the robes is so striking, with a gold that reflects strangely in a way that it feels realistic. 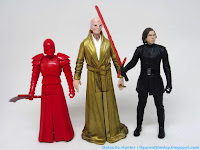 The figure does a good job of capturing the character, telling us more than we knew before - he's a giant old, decaying man in shiny clothes.   Is he rich?  Is he a magazine publisher?   What the heck does he want?   He's got a ring and a robe, what else could an intergalactic warlord ask for?   Seeing how stable and nicely sculpted this figure is, it's almost a shame you have to buy a playset to get him.  But, admittedly, it's a pretty nice playset.  If you have the chance to get one, get one.