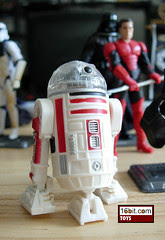 Bio: Calculates hyperspace coordinates for the Empire. Does not survive the assault on the first Death Star. (Taken from the figure's box.)

Commentary: In 2005, I was granted an opportunity to help develop an exclusive, which is an anecdote I'll probably keep repeating until I die. One of many figures I've always wanted to see was R3-T6, a tiny, clear-domed droid in the service of the Empire aboard the first Death Star. As I've felt Hasbro doesn't make enough Imperial toys*, this was one of a few droids at the top of my list for production. He's based on the existing R3-T7 body (2002 Sneak Preview figure), and is exclusive to a 5-pack. He has a retractable third leg as well as articulated feet, legs, and of course, a rotating dome.

This figure is mostly there for droid fans, and for fans who need more figures for their Death Star dioramas. That, and it's rare to see an Imperial Astromech that isn't mostly black-- it's refreshing, isn't it? The figure is very much "what you see is what you get" and is fairly faithful to the props used on film. As its dome is virtually unpainted, it's a fantastic figure for customizing, and of course, for getting a good clean look inside its head.

Collector's Notes: At this time, this figure is still available from Entertainment Earth. Those uninterested in buying the 5-pack would be well-served to go to eBay, as fans break up the set and sell the figure for a few dollars. (In R3-T6's case, $5 or less before shipping.) The R3-T7 (light green with lightning bolts) mold was not only used for R3-T6, but also R3-A2 (orange, Toys "R" Us exclusive) and R3-Y2 (dark green, EE exclusive).

* - This is no fault of Hasbro's. Much like aliens from Jabba's Palace, one can never have enough Imperial toys.
Posted by Adam16bit at 8:20 PM