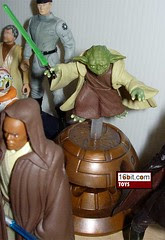 Bio: The oldest member of the Jedi Council. Yoda is a wise and cautious Jedi Master, When Obi-Wan informs the Council of the Separatists' plans, Yoda assembles the Clone Army to subdue the rebellion. Yoda's unassuming size masks his enormous powers. His skills in The Force are not limited to wisdom and guidance, but are matched by his dexterity and fighting prowess. Nevertheless, his suberb skills are tested when he battles the highly proficient Count Dooku on Geonosis. (Taken from the figure's Hall of Fame cardback.)

Commentary: There was a huge surge of interest in Star Wars when new movies came out, and Yoda was an instant hit, being scalped and sold for $25 in no time flat. Even some toy stores held Yoda behind the counter due to "rarity" rumors, requiring you ask if you want one, and only one, because they wouldn't sell you two. It's always a good sign for something to be crazy hot, especially if it's well-deserved. This figure was quite possibly the most decked-out Yoda ever, featuring multiple accessories, a display stand that could levitate, and so much more, plus a decent amount of articulation. Not a fantastic amount, mind you, but a decent amount.

This is a great figure for dioramas and displays, and if you own a Republic Gunship, this is an ideal figure for it. It's fun, it's loaded with parts, and it has a great sculpt-- and it's also the very first figure modeled after the all-digital Yoda.

Collector's Notes: As with many figures, this can be had cheaply, in part due to its long shelf life. Lots of them were made, and a lot of them were bought and kept safe from people opening them meaning you can get one yourself. I wouldn't be surprised to see this figure reissued again someday, but if you want one now thankfully it won't break the bank. Its popularity has fallen, but that doesn't mean it isn't worth a look.