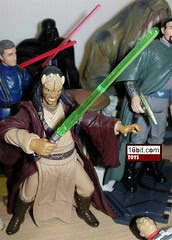 Bio: Eeth Koth is a Jedi Master and Council member known for his highly developed will power and ability to withstand intense pain. He is an Iridonian Zabrak from Nar Shaddaa, a harsh "smuggler's moon" that forced him to learn fortitude at an early age. (Taken from the figure's cardback.)

Commentary: File one under "resculpt!" The Eeth Koth figure was not only a bizarre sculpt, but also reused for other purposes. Posed in an action battle stance, this figure is one of few whose personality, pose, and abilities in no way match his appearance in the movies. As all he really did in the first prequel was sit around silent, one thinks it would be an easy figure to replicate-- but Hasbro was trying something new, and not entirely awful. With no real meaningful leg articulation, all this figure is capable of is assuming a number of battle poses, but they're neat unto themselves. Eeth Koth is a lot like an Unleashed figure in the 3 3/4-inch size, so fans of extreme poses, this is one for you! The sculpt is great, the facial expression is unique, but as we've never seen Mr. Koth enter fits of rage, it's a little out of "character." I use quotes as he really didn't do much in the movie beyond that what a potted plant might do.

Collector's Notes: Hasbro indicated this figure was going to be new and in the style of Episode II figures prior to its release, and they were right! With its extreme pose and the first-ever removable lightsaber blade, it foreshadowed what was to come in 2002. The sculpt was reused for the questionable Jedi Council Screen Scenes from 2003-2004, with the entire figure being repackaged (sans weapon) and another version being resculpted from the waist down to represent Agen Kolar and, of course, Eeth Koth. This is the best Eeth Koth you can buy today, and the best Agen Kolar was the original sculpt from Revenge of the Sith-- so buyer beware, there's no lightsabers in those multipacks!