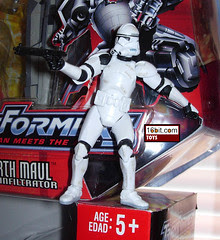 Bio: Equipped for all terrains and environments, the genetically engineered clone troopers combat the relentless droid armies of the Separatists. They are led into battle by the Jedi, who serve as Generals during the Clone Wars. (Taken from the figure's cardback.)

Commentary: This is largely considered to be the best Clone Trooper figure ever, except for one error-- let's get that out of the way. The belt is upside-down. There's a "U" on the belt of this figure, which is the other way on all other Clone figures. The best way to tell if a Clone figure uses this super articulated mold is to look for the U-- it's the most obvious and unique-to-this-figure feature. So keep that in mind when you look at photos of Commander Appo or whatever other new figure is on the way. Oh, Fifth Fleet Security Clone Troopers.

So, how poseable is this guy? He's got ball joints pretty much everywhere-- he can move at 14 points, and in any way you'd probably want. The sculpting is true to the movie, the deco is good, but not without fault. Many fans mistook the "battle damage" for another form of squad markings, and plain white clones basically didn't appear in the movie. So while cool, it's almost an Expanded Universe figure. Of course, none of this matters-- this Clone is as good as they get, so get one.

Collector's Notes: Perfection. A ton were made and distributed but fans still want more, so it might cost you a few bucks to track one down. (Although I found one returned to a Target missing the gun for a buck, so deals are indeed out there.) Most fans hope all new Clones are based on this mold, which should speak volumes for its quality.