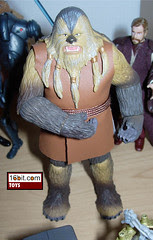 Bio: Wookiee gunners defend the beaches of Wawaatt Archipelago on the coastal city of Kachirho against an amphibious Separatist assault. They fight bravely until the clone troopers turn against them. (Taken from the figure's cardback.)

Commentary: The "final 12" figures of Revenge of the Sith were largely based on a number of existing molds, and the Wookiee Heavy Gunner is no exception. The base figure is a redeco of the Sneak Preview Wookiee Warrior, with grenades from a Han Solo, a grappling hook from Queen Amidala, and a bowcaster from yet another Wookiee Warrior. The figure itself is huge, and very well articulated-- ball-jointed knees and shoulders allow for a great range of movement, making this a big, heavy, nice-feeling figure. However, he doesn't really make an obvious appearance on-screen and the appearance (or non-appearance) of this figure is up for debate. The figure itself is spectacular for army builders, diorama fans, or someone looking for a figure to represent Chalmun, the Expanded Universe's Wookiee owner of a famous cantina. As one of a huge number of generic Wookiees, it's a welcome addition to any collection.

Collector's Notes: This hard-to-get figure was snapped up quickly by fans in 2005. Also, the carded figure has the number of 64, but the checklist has it as 68. R4-P17 was also offered as III-64 or III-68, as both versions shipped from Hasbro.