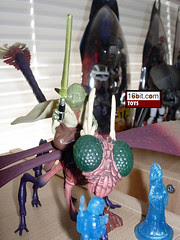 Bio: Can-Cells are huge flying insects native to the planet Kashyyyk, homeworld of the Wookiees. The speed and mobility of the Can-Cells provide an aerial advantage in battle against the invading Separatist forces. (Taken from the figure's cardback.)

Commentary: Yet another refugee from the cutting room floor, Yoda was meant to ride around on a big bug on Kashyyyk-- alas, it was not meant to be, but this figure provides us with one of precious few beasts in the form of the bug-like Can-Cell. Yoda is pretty much a "what you see is what you get" figure-- his arms and neck are jointed, and anything else is pretty meaningless. This figure exists to sit on a bug, and can't do much other than sit and look ready to fight on the back of a mighty invertebrate. The sculpting is adequate, but the paint is below par for the line at the time-- the whites of the eyes are sloppy, and everything goes downhill from there. As to his steed, it's quite colorful and has flapping wings. The toy itself is fragile, though, with weak plastic that's prone to bending even if properly cared for due to weight issues. (They don't design these all for life on a shelf, folks.) As such, be careful with this one.

Collector's Notes: While initially hard to find, this item became increasingly easy to get as people realized it didn't make the movie. It's more of a curiosity than anything else, and collectors who seek out the unusual would be well-served to pick up this release. (Well, lovers of the unusual, and bug freaks.)