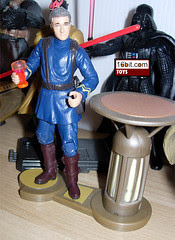 Bio: Don't let the uniform fool you, should you find yourself in the depths of the Coruscant entertainment district. Sure, there may be offciials from the upper levels "slumming it" among the barflies at a Coruscant nightclub, but the Republic official or Senate Guard may in fact be a con artist looking to separate you from your pocketbook. Though at first glance, Lt. Dannl Faytonni seems to wear the uniform well, nothing should be taken for granted. (Taken from the figure's cardback.)

Commentary: Does the idea of owning toys based on a cameo excite you? Allow me to introduce Lt. Dannl Faytonni, who is Anthony Daniels (C-3PO) outside the robot suit. The figure has an excellent range of articulation, a working holster, and a great sculpt-- and the same body was reused for another figure later, but that's OK as it's a good figure. The main appeal of this figure is the fact that it's Anthony Daniels, and customizers will probably take this figure and a C-3PO and bash together something really cool. For the rest of us, it's just an amusing character that is basically scenery-- and he includes some scenery, too. It's worth snagging if you see one.

Collector's Notes: A wacky cameo with loads of articulation and great accessories? How can you go wrong? You gotta buy one.

Email ThisBlogThis!Share to TwitterShare to FacebookShare to Pinterest
Labels: Attack of the Clones, Outlander Club, Saga