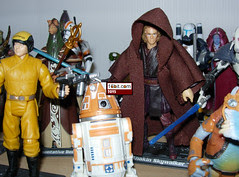 Bio: After saving Obi-Wan Kenobi's ship from buzz droids, crash landing on Grievous' starship and cutting down swarms of battle droids, one would have thought that Anakin Skywalker has had enough for a day's work. But Anakin, now a Jedi Knight, destroys the evil Count Dooku, rescues Palpatine, squares off with Greivous' bodyguards and safely crash lands a burning ship on Coruscant. He arrives back to receive high praises, and a little unexpected news from Padme... (Taken from the figure's cardback.)

Commentary: Say what you will about plastic reruns, but Anakin Skywalker sells. Kids buy him, so we'll be seeing reissues here and there. This particular figure was based on the 2005 release, but added a display base and a cloth cape while removing the red lightsaber. The figure has a slashing attack, which, well, is good and bad-- action features make it hard for figures to sit down. Still, he has plenty of articulation, and the idea of having his hand swap out was a good one-- this way, it's a little harder to lose the lightsaber when he's slashing his arm around. Still, he can sit, he can fight, and he has a good sculpt-- it's a solid action figure, and as a toy, it works. Collectors may wish to get something with more accessories and articulation, and they can find that with other releases-- but this one is still very, very good.

Collector's Notes: The same basic sculpt was used for multiple releases, which probably means you won't necessarily want to or need to buy this one. It was released on a basic card in 2005, with no cloak, 2 lightsabers, and an extra hand. In 2006, the aforementioned 2005 version was released in new packaging (Episode III Heroes & Villains). It was packaged with the exclusive green Jedi Starfighter, the exclusive Kmart Jedi Temple Assault set, and well, let's just say if you're a carded collector you'll have close to a half dozen of these already. Also, for the collector who has to have it all, Hasbro released a limited number of "Ultimate Galactic Hunt" versions of this figure-- it came on a special package with a silver display base, a silver logo on the package, and a faux pewter "holographic figure." It's pretty slick if you can track one down.