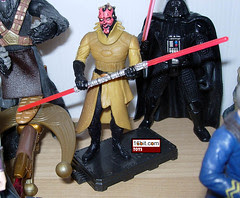 Bio: Early in Darth Maul's training as a Sith, he wears special padding as he learns the rigors of hand-to-hand combat and furthers his mastery of the dark side of the Force. An extremely loyal and apt student, Maul longs to seek revenge against the Jedi Order. It will not be long before he is ready to aid his master, Darth Sidious, in his quest for galactic power. (Taken from the figure's Force File.)

Commentary: With Episode I, Hasbro was faced with a challenge-- how do you make new versions of the film's most popular character when he has basically two costumes and dies? Darth Maul was given the royal treatment, with deluxe figures, basic figures, holographic figures, and this concept art-based figure. With extra (and arguably goofy) armor, this figure allows kids to play with Darth Maul in a new scenario, and acts as a harbinger of things to come-- namely this year's McQuarrie collection. Concept art figures have been around for a while, but this one is unique in that it takes elements of the original illustration and combines them with the character from the final film. The figure is pretty fun, but can't stand up without a stand and can't sit down in a vehicle. So basically, if you're buying this figure, you're buying it because it looks cool. And if you don't think it does look cool, you can save yourself a few bucks by buying something else.

Collector's Notes: This figure's one big flaw is the silver paint on his lightsaber-- it's very likely to come off on the figure's hands over time. As such, be careful with it. This figure has never been reissued and I don't expect it to see a new release any time soon.