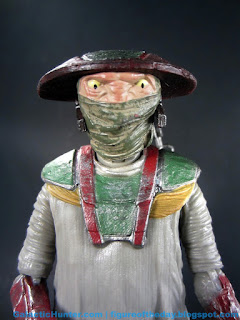 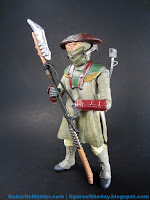 Commentary:  Appearing in 6-inch plastic around the same time as 3 3/4-inch, the big Constable Zuvio seems to be cut from the same reference files.   As I write this, I don't know for a fact what his deal is but I've heard rumors about him being important in the first part of the movie and he enables a jumping-off point of the story.  We'll see!   Right now al I know is that he's short, with a flat face, and a great hat.  Oh, and pretty nifty articulation - the ways they hide the wrists are clever.  The bend-and-swivel joints are hidden behind the wrist armor, meaning you can get some decent poses out of the officer who literally brought a knife to a gun fight.  Maybe it shoots - I don't know, I don't see a trigger. 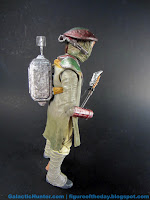 His costume is really impressive.  The weathering on his hat is some of Hasbro's finest work in any action figure line, and the "hard" bits are similarly impressive - silver and dark brown markings make it look like it has seen plenty of wear, and seeing these techniques applied to future figures or redecos of figures (Fett, Boba) could result in some of the most spectacular things we've ever seen. The face is pretty good - mine has cast-down eyes and that could be either intentional or bad paint masking.  I'm not sure which.     Hints of rust peek from the head-mounted (I assume) microphones or breathing gizmos, and the sculpting on his blade shows evidence of a lot of beating.  This is clearly a design that had some time put into it, but the gorgeous, battered armor does clash a bit with the fairly not-worn and hole-free shirt.  It does, however, have a lot of dirt as we move near the fly of his pants, so... I'll refrain from making that joke.  Again, it does show a dedication to diligence with paint because I don't know that I have a better-painted figure from Hasbro this year.   His backpack is so worn that it looks like he got it from a thrift store after it was buried in the back yard for 30 years.   It's just amazing to see what Hasbro is trying these days - I hope it's true to the movie!  I have no way of knowing!   You're in the future! 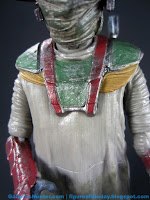 Articulation is better than average for this line, but only barely - most figures have the exact same articulation as Zuvio but more restrictions.   The constable's elbows get a nice 90-degree angle, but his hips are restricted by his shirt.   I'm currently operating under the assumption that this figure will not get a vehicle at this scale, so I'm not going to whine about it - instead, it's easier to just admire him for being able to stand on my desk and not wobble as I type with my massively powerful meat mitts.  Stability is an admirable feature on toys whose sole purpose are to be displayed, so hey Hasbro - nice job here!  It looks good and it stands.  That's most of what we need in a figure. 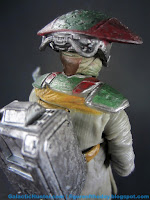 With The Phantom Menace I had a pretty good idea who most of the toys were when they showed up in the store.   For this movie, I don't know - it's weird that I've spent a decent amount of sweat acquiring characters for a movie I may love and I may never want to see again.   We'll see.  Even if Zuvio spits out fart jokes and sounds like Ed Wynn, the figure is superb in its own right.   Any failings are no fault of Hasbro's.  Get it if you think you might like a Zuvio toy, and cross your fingers the movie didn't change his design too much.

...and I need a break.  There aren't many figures in here that I didn't tackle yet - but at this point I think it's getting pretty ridiculous to keep this going without, you know, seeing the movie.  I'll see you in a few weeks!

He was in the movie, but only for a split second during Rey's flashback. I wonder if his footage just got left on the chopping block, and we will see why he was deemed worthy of the black series before so many other worthy characters.