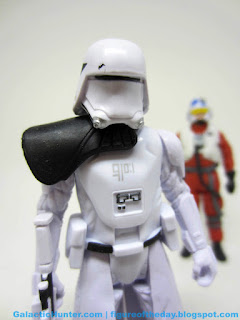 Commentary:  Blah  blah blah First Order Snowtrooper Officer.  With the confirmation that The Vintage Collection is coming back, you really have to examine some of the figures from The Force Awakens and Rogue One in new context - like "was the original good enough," and "if we get a new version, do I want to buy all the flavors again for more joints?"  In this case I'd say the initial figures were pretty good, and if they're going to cost us $13-$15 to get them with more joints I am only too happy to keep the black pauldron trooper I have now.  I don't necessarily need an upgrade. 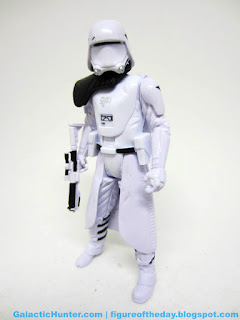 For a figure with only 5 joints, Hasbro did a good job here.  The Snowtrooper Officer has a removable black pauldron, a removable backpack, a swell blaster, and can sit.  This is pretty much all I ask for when the price is right - two figures for $15 is a pretty acceptable price, with the markdowns available online making this a sweet set for the money.  The trooper can stand or sit in his First Order Snowspeeder without a fight, and the waistcoat doesn't get in the way of play or display.  Sure, the pose is boring, but it's not like these guys saw a ton of action on Starkiller Base in the final cut of the movie.  The deco is sound, with the hest markings in place and a shoulder marking too.  It's mostly an unpainted white plastic figure, save for a belt, the helmet, and a couple of other bells and whistles.   If you wanted a cheap figure to army build, this is it - there's not a lot too it and it doesn't disappoint.  He stands, he grips his blaster, and he doesn't fall over backward after standing on my desk for a year.  This is a good figure.  It is not a great figure.

You more or less get your money's worth here, and odds are Hasbro is preparing a more complex version of it as I write this.  Why wouldn't they?  We're suckers for vintage packaging and troopers, so they could easily trot out four or more of these in the next few years.   If they don't, it's possible the existing versions will be somewhat desirable given the lack of an alternative, but nobody seems to care too much yet.   If we ever get evidence that Hasbro will formally "move on," like we've seen with The Clone Wars, I could see fans getting antsy that they missed this one - but given its current asking price on Amazon of under $8 for a 2-pack, that may be a ways off.   I'd recommend this one for now, but keep an eye out for something better.

Collector's Notes: I got mine from Entertainment Earth a million years ago.