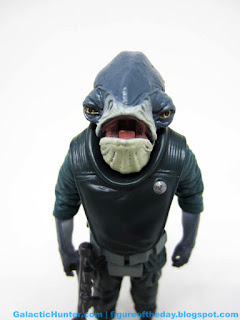 Bio: Admiral Raddus was one of the earliest fleet officers of the rebellion.  When the Galactic Empire invaded, the aquatic world of Mon Cala, Raddus led the Mon Calamari into battle.  (Taken from the figure's packaging.) 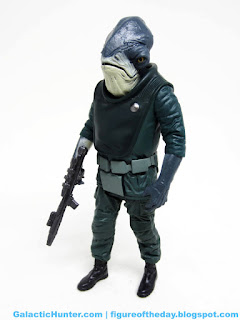 Commentary:  I don't think any species has had its planet renamed as many times as the Mon Calamari. Admiral Raddus now comes from Mon Cala - previously it was known as Dac, Mon Calamari, or just Calamari.   And Ryloth is Ryloth is Ryloth.   I got the pleasure of seeing Admiral Raddus early when I (and those who showed it to me) didn't know what he was - Admiral Ackbar in black?   Could he be an Imperial stooge?  An Episode VIII-era guy we haven't met yet?  Something from Rebels rendered horribly wrong?  I didn't know - but when I first saw the jacketed Poe Dameron I had no idea that's who it was.  So why ask me?

As a kid who was bonkers about Star Wars and sea life, this is one of my favorite figures in recent memory.  Raddus' good points - cool alien, decent articulation, fun gimmick - is why I collect action figures in the first place. This figure is a lot like the Admiral Ackbar from last year.  The figure has an opening mouth, with a better execution and superior paint job. The jointing is really top-notch, but the neck doesn't seem to turn.  Both the lower and upper head parts seem to move just fine, with arms and legs that swivel about as well as any figure from this line manages.  The legs swing forward, but not at that perfect 90-degree angle you want - which, if you ask me, sort of misses the point of this kind of figure.  If it's a toy figure, it should behave as one - thankfully Hasbro sculpted the hand to grip his nifty oversized blaster pistol. 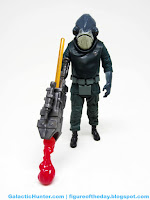 The rocket launcher can be held in his hand, serving more as a cane or a tripod than as a fun accessory. Gravity will not allow him to stand with it,  plus launching it is sort of tricky - if you want Raddus to fire the gun himself while it's in his hands, it's a nuisance. It's not fun.  this is one of those things I really would like to have a longer discussion about with someone at Hasbro because I have to assume there's some reason they do this and I'm not a kid so I don't get it.  I'd want the figure to be able to stand with the gun and launch it from his hand, without having to carefully hold the figure, the gun, and then flick the rocket just-so to get it to move.  It's a nice caricature of the smaller blaster, but I just don't dig it since it doesn't feel like it makes Raddus better.   If I could've had a $6 figure without it, I'd much rather have had that.   Or a second, non-firing weapon. Or a stand.  Or a funny helmet. 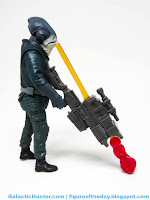 Raddus himself is worth the effort to get.  I love the light skin fade, giving him a look not entirely unlike a shark.   The eyes aren't quite as fishy as Ackbar, but they're gold and nice. The interior of the mouth is painted nicely, and the hands are a little more human than some other takes - there are no suction cups here.  The figure's body is hollow, which you'll sense immediately.  It feels a little bit cheaper, but also less top-heavy, so I'm all for this decision.  The sculpted detail is on par with other figures - wrinkly, sharp.  The figure has many pockets and easy-to-miss details like ribbed horizontal designs on the back of his knees.  They really did a nice job with the hip joints too - the vest covers them in part, with rounded haunches so he doesn't have strange, squared-off butt chunks when seated.  If you don't know what the heck I'm talking about, you may  have missed the ReAction figures. 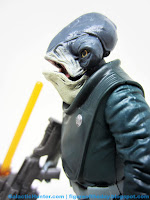 Hasbro has been stingy, Scrooge-like, with new aliens and droids since the Disney takeover.  Obnoxiously so.   This is why I'm so utterly delighted to have this figure, even if he's just a black take on Admiral Ackbar.  I eagerly await his pale white crew, and anything else they feel like doing from the background of Rogue One.   If you haven't seen Star Wars Rogue One: The Ultimate Visual Dictionary you should get it.  You'll scream.  It's so jam-packed with amazing aliens and pilots and droids that you will be furious the Rogue One line basically crapped out at three waves and three figures.   I'm so happy we got Raddus, especially if he represents the last weird alien or Rebel leader from the movie.  I want more - I'll always want more - but I'd be sad if we never got Raddus.  Fan's Choice doesn't exactly seem to be going the way I'd prefer for the last few rounds, what with the non-movie stuff winning, so I'll just hug my movie figures a little bit harder.  I'm happy you're happy, and I hope you're happy with this one if you find one.

Admiral Blackbar? Damn, this is as exploit-y cool as Blackula!