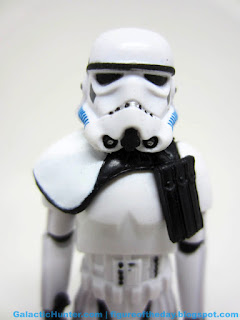 Bio: Stormtroopers are  the faceless legions of soldiers serving the Gaalctic Empire.  Encased in white armor, stormtroopers are loyal Imperials who undergo rigorous training that strips them of any sense of individuality.  (Taken from the figure's packaging.) 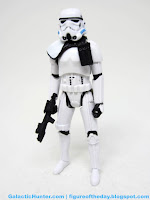 Commentary:  Kohl's exclusive sets aren't the most exciting - last year they had bonus exclusive "build a weapon" bits, this year they have figures like this Imperial Stormtrooper with tweaked deco.  In this set (and only in this set) you can get one with a white pauldron, although the exploding chest white pauldron version can be had as part of a Toys R Us exclusive set I still need to write up.  Well, some day.   This particular Stormtrooper is the "made in Vietnam" variant - the same Imperial Stormtrooper [FOTD #2,303] mold used for the pack with Baze Malbus - so you know what to expect there. 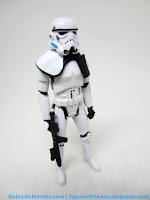 The only real change from the two-pack release is the pauldron - it's white here.  It was orange with Baze.  The figure itself looks sharp with 5 points of articulation and the revised Rogue One blaster with the extra greeblies.   He has no problems standing or holding his gun, but I do have a problem with the weird haggling that is buying a toy at Kohl's.  You may know this, but the sticker price is $49.99.  On almost any given day, pretty much everything is on sale at this retailer.  Maybe 5%, maybe 15% - and maybe there's a $10 off $50 coupon, and so on.  You can get it down pretty cheap if you didn't want for clearance, I paid $23.90 last November - and I heard clearance prices were even lower than that.  So when buying anything there, come armed with a knowledge of sales and coupons.

If you're a fiend for trooper variants, this is a pretty significant one.  If you aren't, you can/should skip this one.   I see it as essential and unique, but it's possible you just made one with some white paint.   For $25 or less, it's a fantastic set and a decent deal.  At $15 or less, it's a steal.  At the initial asking price of $49.99, it's a $20 mark-up over the equivalent figures.  Actually, you could get the Moroff/Scarif Stormtrooper and Death Trooper/Pao sets for $30, and an individually carded Stormtrooper for $8, and have $12 left over.  Plus a bonus figure.  It's just not a screamin' deal, is what I'm saying.

Collector's Notes: I got mine from Kohl's, but it's cheaper on Amazon.