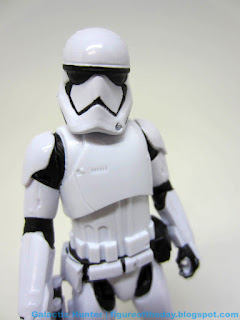 Bio: Stormtroopers, also referred to as First Order stormtroopers, were the military infantry units of the First Order.  (Stolen from Wookieepedia.  Packaging has no bio.) 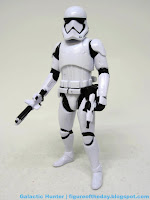 Commentary:  I like troopers, but First Order Stormtrooper figures changing in any way was a surprise.   Given that episodes 7 and 8 are, narratively, back-to-back there's really no reason most characters should change clothes in any significant way other than To Sell Toys. For movies with multi-million dollar budgets, I'm a little surprised some line producer didn't just roll up a script, thwack Rian Johnson with it, and say "We've got helmets, we're using them, no you don't get new helmets."   But apparently they have more dollars than sense so here we are, another helmet variation so the figure doesn't quite fit in with any existing army you may have built.   To date, this is the only plain 3 3/4-inch The Last Jedi First Order Stormtrooper - but there's an Officer in a Kohl's set.  There are also Executioners at Toys R Us (Force Link set) and Walmart (The Black Series)... which, given their role in the movie, kind of works out perfectly if you're a one-of-everything collector. 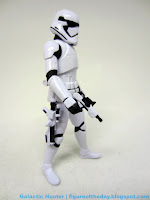 It's not the exact same figure - tiny differences in the armor detail are present, and the legs are posed a little differently.  It's not a significant difference - the helmet is the main one, with a new mouth.   He also has a more useful second accessory, and is one of very few figures in this line to have an extra of value.   A small pistol was previously only available in Walmart's The Black Series figure, but you can get it here.  Much like the rifle, it plugs in to his thigh for storage.   As accessories go, I think this is great - had Hasbro included an optional pauldron it would be even better, but, as you saw, why give it away when you can charge us $49.99 for it at Kohl's?

The Stormtrooper can sit and stand, and speak.  If you already have an army you may not wish to introduce a new element to the squad, because you may wind up buying tons more of the new flavor.   It's a perfectly nice figure, but it has less stuff than last time and it costs more.   I'd say "for completists only" but really anybody wanting an excuse to buy more Stormtroopers should buy this one.

Force Link Notes:  "Blast them."  "Sir, we’re searching the area."  "Surrender!"  "Trooper reporting for duty!"  "We have targets in custody."  Also a smattering of blaster sounds.  It's obviously not from the  movies.