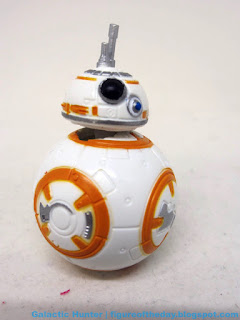 Bio: BB-8, sometimes spelled Beebee-Ate, was a BB-series astromech droid who operated approximately thirty years after the Battle of Endor. It had a dome head, similar to that of R2 series astromech droids, with the bulk of its body made up of a ball on which the droid's head rolled.   (Stolen from Wookieepedia.  Packaging has no bio.)

Commentary:  Hasbro's treatment of BB-8 is kind of odd - they basically make the figure hard to get.   To date the figure only appears with vehicles or in multi-packs, making it difficult to get one for Hasbro for less than $15.  (Disney sold a carded one for $13 at its theme parks.)   I could go on about the increasingly strange decisions in Hasbro's current lines, but that's not why we're here - let's instead look at a decent figure in a good set.

This take on the droid is weird.   Like many figures in this line, it's derived from the same sculpt as The Force Awakens, but it's a different figure.  The details are different, it's hollow, and it's much glossier.  The figure lacks some of the dirt from the last version, and has a few more details.   An added silver ring was painted around a blue sensor, his antenna have more sculpted details, and his paint job seems cleaner and more precise.   From a decent distance, it's Hasbro's best version yet.  It has to compete with the Disney version, which may be more to your liking due to its size and different details. 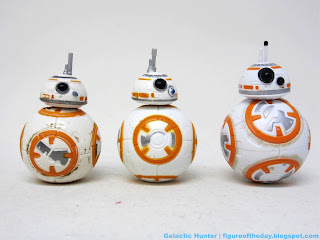 Functionally, it's a mixed bag.  The figure has the same flat base as last time, but the factory forgot to make the figure more weighted - so it falls over easily.   A little extra junk in the trunk keeps the droid from falling over, as a flat base can only do so much to help.   It's a perfectly nice BB-8, but Hasbro can do better.  If you already have a BB-8 figure, this should be considered an optional purchase unless you want BB-9E and First Order Rose.

I would be very curious to see how Hasbro would plus up a BB-8 on a single card - a droid buddy?  More gear?  Porgs?  A super-deluxe version of the robot would be wonderful, and hopefully we'll see one in 2019.

Collector's Notes:  I got mine from Entertainment Earth.

He's seen aboard the Finalizer with General Hux. According to the Visual Dictionary, his name is Opan and he's Hux's aide. The reason both his and Finn's uniforms say "Dillon" is because the First Order denotes rank by using the names of Imperials they admire: in this case, officers with Dillon cuff bands are captains - Opan is a captain and Finn swipes a captain's uniform.