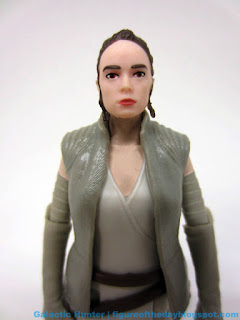 Bio: Rey was a human female Jedi and scavenger who discovered her latent Force-sensitivity while on a journey to find the legendary Jedi Master Luke Skywalker and bring a new hope to a galaxy on the brink of war.   (Stolen from Wookieepedia.  Packaging has no bio.)

Commentary:  If you got the end-of-movie Rey figure from 2016, this is a lot like that.  The sculpt seems to be very similar (but different) from Rey (Resistance Outfit) [FOTD #2,267], most notably the folds in the bottom of her shirt.  The wrinkles in the knees look almost identical, as is the pose, the holster, and the overall functionality.   This one is a lot like the new movie's Poe - she has swivel forearms now, and adds a new cloak.  She loses the bonus gun and her staff.  The head sculpt is a little sharper, but the figure itself is basically the same thing as last time - the poncho being the saving grace for making her at least seem like a new figure. 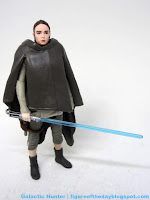 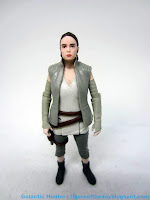 Had Hasbro made her a "Vintage" or "Black Series" figure, this could be pretty exciting - as it is, it's a slightly improved rerun with a new sound chip.     She has 7 points of articulation and has no real problem standing or even sitting, but the legs can't swing forward at a perfect right angle.  It's close, though.   She has no problems holding her lightsaber or blaster, and the blaster fits in the rubbery holster without a fight. The facial detail is good, the paint is mostly crisp, and she's a little pale - but it's a good figure and consistent with what Hasbro has tried to do in this range.   It's not bad.  It's not what you necessarily want, unless you missed that last figure, in which case this is the better version.  It's just not a lot better. 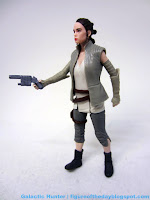 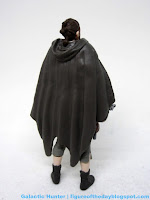 Her lightsaber has a loop at the end, and it looks amazing.  I see really small detail here that I didn't even realize could be on something of this size - the sculpting is really dynamite and certainly qualifies as praiseworthy.

Force Link Notes: "I'm Rey." "Help me with this! Quick!" "The Resistance sent me." "You're a monster!" And the usual combat effects.