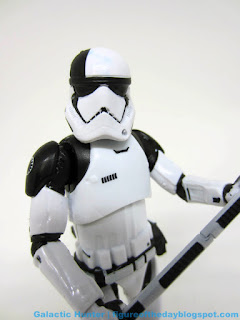 Bio: The First Order can only operate efficiently with the absolute loyalty of its followers.  Should any soldier be found guilty of treason, it is up to this special branch of stormtroopers to dispense final justice.  (Taken from the figure's packaging.) 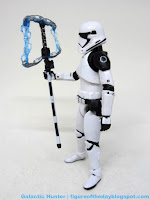 Commentary:  I have to say that the First Order Stormtrooper Executioner is a nifty example of why good packaging copy can stir the imagination or result in disappointment.     The brief bio almost makes it sound like these guys were the First Order's own Bounty Hunter squad.   The reality was more of a cameo - a couple of this trooper showed up to not really do much other than menace our heroes for a moment.   The figures were on a lot of signs and were sold as multiple exclusive action figures, some of which were a little too widely available for the needs or demands of the market.

The core figure is very similar to The Force Awakens Stormtrooper, which had the holster slot on the thigh for a blaster that wasn't included.  The figure has no problems holding the nifty Laser Axe, which we really didn't see do any damage on-screen.  Maybe we'll see it again next time.   Deco is similar to the basic Stormtrooper, including the slightly sloppy application around the mouth.  New black stripes on teh helmet and shoulders really bring out some personality, but other than that there's not too much new here  A little black detail around the ankle, a First Order symbol on the shoulders, and a general specialized feel make this a nifty figure, if not thoroughly essential. 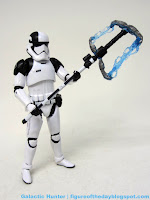 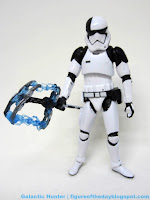 If you're a one-of-everything completist, a second Executioner may be in your collection from Toys R Us' Force Link starter pack - which also includes a unique Praetorian Guard.  I much prefer this one, and I rarely see it in my toy travels.  These super-articulated figures come and go quickly, showing just how popular the format is despite limited distribution and wonky packaging.  If Hasbro makes a good figure with 26 points of articulation, fans will show up and will buy them in droves.  Hopefully more are in the hopper for future distribution as demand is far from satisfied.

Email ThisBlogThis!Share to TwitterShare to FacebookShare to Pinterest
Labels: Exclusive, The Black Series, The First Order, The First Order Stormtroopers, The Last Jedi