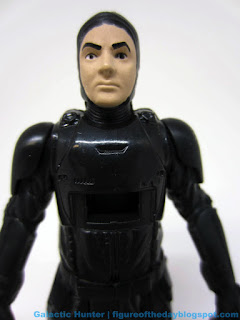 Bio: The elite of the First Order Starfighter Pilots have access t specialized craft, such as this two-seater TIE craft outfitted with enhanced weapons and sensor systems.  (Taken from the figure's packaging.) 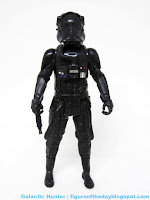 Commentary:  Sometimes I see an exclusive vehicle and I get excited.  New Jedi Starfighters gave us new colors, new X-Wings often had new squad marks or exclusive pilot figures.   The Empire's standby craft often got into the area of just different enough to make you mad, and the First Order TIE Fighter Pilot comes with a ship that certainly meets that standard.   Like the 2015 pilots, this one has a removable helmet.   The figure has 5 joints and no visible sculpted copyright markings.  Unlike the other Force Link figures, this one has no sign of sculpting changes to the foot for the Force Link symbol - they just painted it on there. 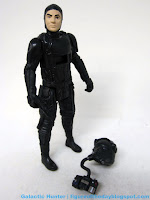 The main reason to buy this is the sound effects - because that's what's new here.  The figure makes a few quotes that don't seem to be from the movie or a Lucasfilm resource, most likely the result of Hasbro employees improvising.  The vehicle has some really awesome TIE Fighter noises, and unless I'm mistaken is Hasbro's first electronic TIE vehicle to have the iconic engine roar.  It features the same functions as the original ship otherwise, for good and for ill.  I still love the canopy lid's gun storage. The firing rockets are superb.  And the wings are still awful.  I opened this and left it alone for a few months, and the wings just warp and bend when left alone on a shelf.  This is the exact opposite of what we should be seeing now, as Hasbro had the same problems with the newer, bigger X-Wing mold used from 1998-2012.   Kenner had the TIE Fighter wings right for nearly 38 years, so the problem starting now is a little baffling.   The wings pop off when you push the buttons - now under the pylons, the opposite of what we've been trained with since 1978. 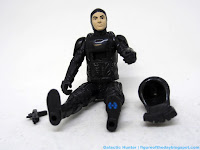 The figure itself is nothing new - were it not for the sounds or the change on the foot, you could skip it.  For the added benefit of the sounds, I would say this is the better TIE to get.   He has First Order symbols on his shoulders, and the buttons on the computers are basically unchanged.  I was hoping the color of one of them might be a tiny bit different, but it was not meant to be.   I admire Hasbro's clever way to fit a new functionality in a vehicle with no added costs, but would it have killed them to give the figure or vehicle some notable change?  Battle damage!  Meteor impacts?   Different colored lights?   The era of buying two of everything has long passed.   One of everything is even a stretch for fans who splintered off from the prequels, or TV shows, or the Disney era.  The number of unsold TIEs around after Christmas said that there wasn't much demand in general, and I don't know that a lot of collectors bought this just yet.  If you're waiting for clearance, I don't blame you.  It's a lower-end-of-decent piece and if I never bought it, I'd not miss it.