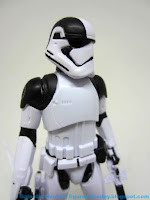 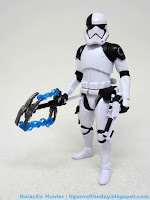 Commentary:  This First Order Stormtrooper Executioner is a handy addition to the line - mostly because there were two in the movie and two different figures.  Each is a little different - the sizes of the First Order symbol are different, the Black Series one has a few more black details painted in, and obviously it has more articulation than this 5-jointed Force Link figure.

This is basically the single, white trooper with added deco -  you get the two blasters (which the Black Series one lacks), plus a newly tooled axe.  This one has an unpainted grip but a removable energy piece - I'm kind of surprised.  Hasbro tools up a lot of similar items these days, so it's kind of nice to see some variety in accessories.  I'm really happy to see so many weapons in this pack, mostly because it needed some "oomph" for the price.   $15 in figures and a $20ish electronic Force Link band can always benefit from a little something extra - and painted blasters are a nice addition.  They can plug in the figure's thigh or the hands, which is basically all you can ask for from one of these guys. 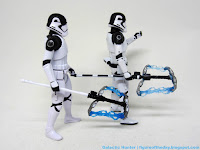 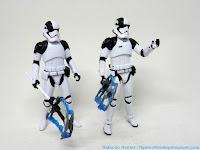 The figure has no problems standing or sitting, but it can't do any cool combat poses thanks to the limited articulation.   At least it works as intended - these aren't complicated figures, but they look decent enough where you might find them to be worthwhile.   You might also be happy with two of The Black Series figures.  For diorama builders or people that want variety - especially those who are post-army-building - this not-quite-duplicate trooper allows you to get a squad without doubling up.  Technically.  I like the figure a lot and wish it were sold by its lonesome, and would say it's decent enough to be worth your while if the price is good when you buy yours.