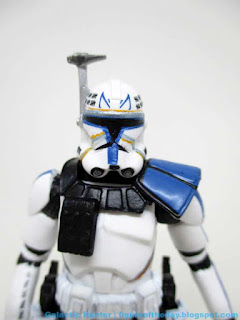 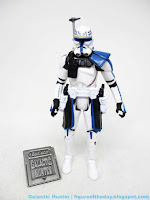 Commentary: One of the most commonly asked questions I get about new announcements from Hasbro is "is this new?" This is sort of the problem with the line right now - it's not obvious what you're getting. This Captain Rex figure started shipping late in 2020, and is a redeco of 2015's Captain Rex [FOTD #2,166] which was a retool of some existing clone commander figures. Despite being a new release and his first appearance on a Vintage cardback, the figure is old. It's improved over the 2015 release and superior to the 3 3/4-inch The Black Series version, but it hasn't aged well.

I really scrutinized this one in an effort to find something that easily distinguishes it from its previous release beyond the date stamp. The deco is improved, sort of like the difference between a 1080p program and a pretty good 4k master. It's an improvement! The colors are brighter, the contrast is better, the kill marks are sharper, and you can see more - but it's also still the same old figure. I like the bluer blues and blacker blacks of this release, and things like the marks on the hands are much sharper in 2020. The white paint over dark plastic is still a little ugly, but it's better than before. Hasbro didn't take the opportunity to improve the paint with more damage or scuff marks, as it seems the same basic patterns were kept for the welding marks and stripes. If you saw this on the shelf, you probably wouldn't realize there were any changes unless you had the prior release in your pocket. I couldn't even tell any obvious differences when comparing the 2020 figure to my (and other sites') 2015 release photos. It's that close. 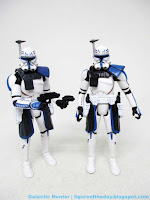 Since the old one is expensive, that's good for you - you can pre-order this one for as little as $12.99, which is good, because it's not amazing. The hips are last-century's swivel models, with no thigh cut joints. The shoulders, elbows, and wrists are good but lack the range of movement of the most recent figures. The hip joint is a basic swivel, which was outdated at the time of this figure's release. Sculpting is good, mostly using recycled Clone elements, with a helmet that strikes me as too small for the body. You may disagree. If you just need a Rex on your shelf, this is a good one, and priced right, and probably the best one you can buy right now. 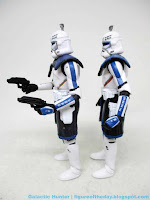 I would invite Hasbro to try again - they often do, to amazing results - because Rex is superbly popular now that 13 years have gone by since we first got the animated figure in 2008. (Which I also happen to like more.) This Rex lacks a removable helmet or much personality, but the welding area is rusty and shiny all at once, making this a perfectly OK figure. In case any of this sounds contradictory, it kind of is - it's like a really good student phoned in a paper. Is it better than many of the others? Yes. Is it their best effort? Yes, but not if they put any investments into new clone sculpts in the past several years. We saw significant 3 3/4-inch figure improvements with the Rogue One figures in the 3 3/4-inch The Black Series in 2016, so anything before that seems almost primitive.