Star Wars Figure of the Day: Day 2,777: The Child (with Din Djarin, The Vintage Collection) 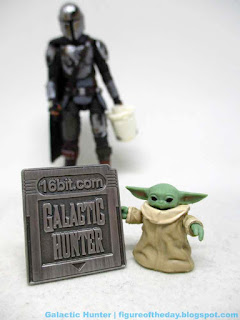 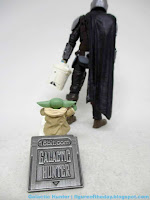 Commentary: I should be on the way to Toy Fair today, but you know. Life. Ever since the show debuted, fans asked "when are we getting a 3 3/4-inch scale The Child?" Or "Baby Yoda" or "Grogu" or whatever - and here he is! Just in time for what is probably a temporary (if not permanent) departure from the show. At only 3/4 of an inch, he's a tiny little guy and it makes sense he is treated like an accessory, with no representation in the name box or the photo. It's also funny, because they could just as easily sold The Client or another character as an accessory to the kid and people would probably agree that it was worth $15.

Coming in shorter than The Black Series figure, this figure looks better out of the gate with the collar and cuffs of his onesie painted a lighter color. He has only three points of articulation - neck and arms - with tiny painted feet if you flip him over. There's no issue with him standing up, and there are no foot peg holes. In the 1990s, this figure would have zero to one joints - today, Hasbro gave him actual ball jointed shoulders and a moving neck.

He also would have probably been unpainted or barely painted - today he has little black eyes, green feet and hands and the aforementioned robe deco. While I would have appreciated any texture to the sculpt under the robes, everything visible when he stands on a table looks great. He's oddly expressive for a face the size of a pea, with shiny black eyes and chubby little cheeks that go great with his big ears. You can even see a subtle pink fade in the ears, which 20th century toy companies would've (and had) skipped on similar figures.

I have to hand it to Hasbro, as an "accessory" this figure is pretty remarkable. Hasbro could've given Mando a messenger bag with a head sticking out of it, and this figure w ould have sold incredibly well - but instead, we got a full-bodied tiny sidekick figure. It might not be "worth" $18 but I can't imagine any fan of the series unwilling to pay that given Mando by himself sells for $13 (or more) these days.

Collector's Notes: I got mine from Walmart.com but no pins were included with my order as later advertised on their site. If you got a spare pin for sale, hit me up. (I'll trade you for the Galactic Hunter pin, a limited edition with even more limited interest.)