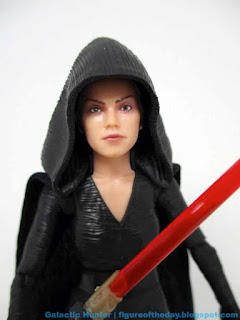 Bio: While searching for the Sith wayfinder, Rey envisions her turn to the dark side. Wielding a double-bladed lightsaber, her rage and immense power is frightening. (Taken from the packaging.) 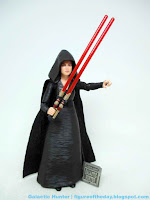 Commentary: If you liked The Rise of Skywalker, or if you have taste, you can probably agree that Rey (Dark Side Vision) represented a tantalizing taste of a story we didn't get. Hasbro has mentioned on a few occasions that they knew they had to make her as soon as they could once she showed up in the trailer - and that wasn't much different from her appearance in the actual film. The vision was basically just Rey in one of very few significant costume changes, a mix of Palpatine's robes and Kylo Ren's outfit, with a nice hood and some dark make-up. She doesn't look super-evil, but she does look pretty cool. Also this figure has proven to be insanely popular, which makes sense, because Hasbro put a lot of love into this design.

The 6-inch scale figure has two key landmarks that are likely to grab your attention. The hood is black plastic affixed to the figure. You can turn her head inside it, but the hood won't move. It sits on top of her shoulders which have a cloth cape that is one of the better executions of robes, capes, and the like in this scale. Her double-lightsaber is hinged, with hilts designed to look like a warped take on the classic Graflex Skywalker Saber look. You can see Vader's black cap in the design, a mutant version of the Luke/Anakin tip, and some coloring that reminds me of Palpatine. It articulates nicely, and is one of the better (and more fun) accessories in this scale. 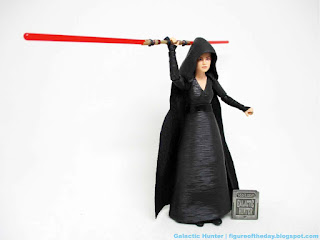 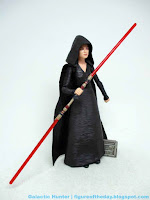 The figure herself is excellent. The hands can grip the weapon. She can stand without a hitch. The elbows can bend more than 90 degrees - that's a huge plus. You can see a little ring on her hand, and her outfit is sculpted with horizontal bands all over. This reminds me a lot of the 1977 Darth Vader suit's gloves... and Dark Empire Luke's outfit in the comics, and Kylo Ren's costume. Getting her to stand or posing her is an effortless affair, and she has great knee joints, rocker ankles, and thigh swivels. Anything below the waist is largely worthless thanks to the plastic dress clamshell, but it's nice to see they put the work into it since they were going to charge you the same regardless of the number of joints. There are about 29, by my count.

While this figure doesn't really do much to expand thee galaxy, it's good. The only suggestions for improvement I would make are ridiculous, as the portrait's printed face is wonderful, the articulation is as good as any Hasbro figure on the "better" end of the spectrum, and she just plain looks cool for a cameo costume. If you can see her for $20ish, buy her if you like her costume! This is a lovely figure and I can't see much reason for them to make more figures of this costume. Also, as I write this I do not have Asajj Ventress... I am curious if she will share leg tooling with this Rey. It would be hyperbolic to say that The Rise of Skywalker would all be worth it for this figure, but I would go as far as to say this may well be the best thing to come out of Hasbro's toys for that film. Their offerings since the new line look have been consistently superior.