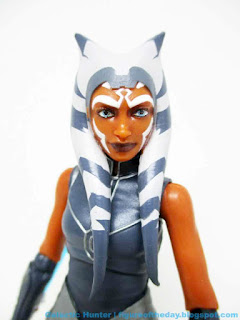 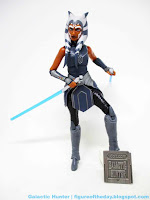 Commentary: Never let it be said a prequel can't surprise you. I was a bit surprised to see Ahsoka Tano involved in the events of Order 66 after leaving the Jedi Order - and seemingly the series - in one of the best non-finale exits I've ever seen on a TV show. While I was glad she came back - as she had a great arc in the final season - watching her walk off was probably one of the best moments in the entire Star Wars saga. Nobody got shot, nobody got their head cut off... she's just out there somewhere. And by the time we saw her battle with her former Clone comrades, we already knew she survived - but boy howdy was that intense.

This Ahsoka Tano build on the 2016 model, which was also reissued in 2020 with new deco. The head is aged down to look like her younger appearance, with the shoulders, torso, and skirt being revised while the forearms and legs seem more or less the same. I can get her to stand, but the ankles aren't great and getting her to balance in an action pose is tough without assistance. This figure makes a compelling case for doll stands. 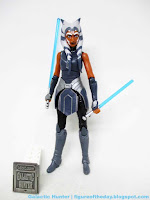 Articulation is about what you expect from a mix of new and old parts. The arms are great. The double-knees of old and the ankles, less so. You can get her to stand but it's fiddly - newer releases are less of a hassle to get standing, or to put in interesting poses. It can be a challenge to find her center of gravity, so I would advise she have a good stand or lean against something when going on display. I would mention deco, but it's hard to say much because they nailed it. What could you improve here? Maybe the boot deco? That'd be about it. I like it as is, though.

I really like how her skirt piece was redesigned to incorporate two small holes to plug in the lightsaber hilts. They have removable blue blades - true to the series finale! - and she can carry them around if she likes. I struggle to imagine much room for improvement here, as accessory interaction has been one of the rougher spots for Hasbro's Star Wars figures. I'm glad this one works well. The lightsaber blades are also a vibrant blue color.

I like this Ahsoka figure a bunch - it's a bit more dynamic than the Rebels costume, even if it isn't quite as accurate thanks to the reused elements. I assume this is the best Ahsoka we'll get... until Hasbro makes earlier appearances in this line to appeal the growing fan base for this character. Regardless, get this one if you have a chance, it's excellent. But if you want perfection, the 3 3/4-inch The Vintage Colletion release appears to be a completely new sculpt and as such does not have recycled legs - and may be more to your liking.