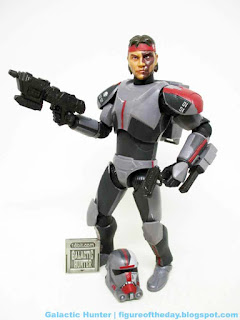 Bio: The Bad Batch technically known as Clone Force 99 is the result of Kaminoan experiments to create a specialist unit of clone commandos. Hunter, their leader, is a strong and stoic soldier with extraordinarily keen senses that give him an edge when tracking down his targets. (Taken from the packaging.) 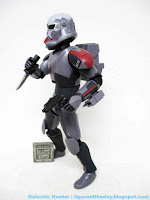 Commentary: Effectively a mutant or part of Star Wars' own Fantastic 4, Billy - er, Hunter is star of an upcoming spin-off series that got its backdoor pilot on the final chunk of episodes of The Clone Wars. The figure shares pats with numerous other releases - the basic "new mold" Clone Trooper feet are obvious, plus other elements are shared with Crosshairs. And, undoubtedly, other figures - you can see parts and pieces here that could be used for Fixer, Boss, Sev, and Scorch too. This mold seems like a gift that's going to keep on giving, provided Hasbro set up the tooling with a lot of retools in mind. It's a good figure with lots of accessories. Hasbro did a bang-up job here, minus the banged-up parts. 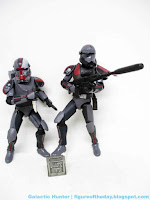 When you first pick up this figure, you'll undoubtedly be impressed by the amount of paint on it - and then, after some scrutiny, disappointment will make you realize they missed a bunch of spots. While Asajj Ventress did dang near anything they needed to do, you'll see that Hunter comes close. The face has the marvelous expression, the long hair, the bandanna, even the unique markings on the face and armor. The sculptors did a dynamite job with big shoulder pauldrons, distinctive knees, new chest armor, and so many new elements that you'd wonder why they'd bother recycling anything from existing clones. The figure is loaded with sculpted scrapes and scuffs, adding wear and tear to the knees, shins, and elsewhere. These scuffs are not painted like the animation model - they're just pristine, and that's odd. Had they left the sculpted part flat and pristine as well it wouldn't be much of an issue, but it's something that stands out a little bit here and a lot on Crosshairs. Thankfully the grey clone also has a lot of red detail, some dark grey pieces, and the black body glove. 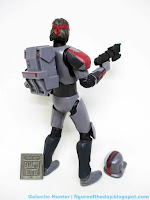 The figure's sculpting is as good as his brothers, with articulation that's typical for a modern release. The thigh armor doesn't prevent the legs from swinging forward, thanks to their ability to rotate a bit. He could sit in a chair if you had one handy, plus his arms have no problems holding his accessories. The backpack doesn't open to store spare gear, so you may need to designate a spot to store your extra blasters. It really feels like Hasbro's G.I. Joe design philosophy rubbed off when it came to the added accessories and improved articulation.

I love the head sculpt, and it reminds me a lot of Solid Snake from the Metal Gear games too. Now that we know Hasbro is prone to rerun old figures with improved paint, I am hesitant to recommend this - it's very good, but you can see so many parts where a little paint would do wonders to improve it. If in the far future there's never an improved paint job, I'd say buy this figure and love it - because it really is great. I'm just nervous that they'll make a better one later, in some future Archive wave, because you can see the spots for improvement. Fans of the cartoons or the video games will probably really enjoy this, just because it feels so much like some of the more interesting offshoots in the once and possibly future Expanded Universe. And it's interesting to look at. And it's really well-designed. If you see it for retail price, you're going to like it. And if you add some silver into the scuffs, you're going to like it more.

The first photo makes me think it is smaller. He's a bulky figure with that cartoonish look to him. I look forward to the cartoon. Good looking figure and good post.