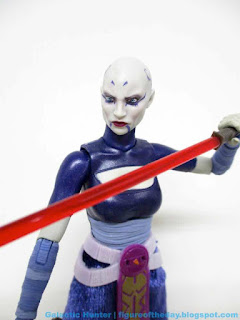 Bio: An assassin trained in the ways of the dark side by Count Dooku, Asajj Ventress yearned to be considered a true Sith, but such status wasn’t allowed under the Sith’s Rule of Two. (Taken from the packaging.) 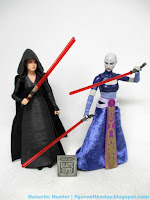 Commentary: Is Asajj Ventress perfect? If not, she's close - Hasbro hasn't done a new "realistic" take on the animated character since 2005, so it's heartening to see them do an excellent job while drawing inspiration from the popular 2008 The Clone Wars costume while secretly recycling Dark Side Rey tooling in the forearms and legs - and I think at least one of the hands, too. If you love The Clone Wars you should be buying this figure and demanding that Hasbro make a matching 3 3/4-inch version for you. 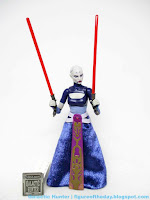 Over the last few years we've had lots of figures in the happy side of good, missing perfection thanks in part to a weird joint or odd deco choice. Ventress just sort of nails it with slightly brighter colors than on TV, but that's OK - when you translate a stylized animation model to realistic proportions, you can make some changes. Her shoulders aren't as pointy and her face is a bit rounder, but that's OK - most people don't have pointy shoulders. The arms are a little stiff, but I haven't had a problem getting her to assume a number of combat stances. Her legs have a good range of motion, and are covered by the metallic purple fabric skirt. Under the skirt, her legs don't match the color pattern seen on early episodes of the show - not a huge deal, but they got it right for her forearms.

The lightsabers can plug in to one another to form a staff, or you can detach the blades and connect them to her belt. It's awesome! The only things you could add to her would be a black cloak or maybe a holographic Count Dooku with which to conspire. As is, it seems like Hasbro gave this figure every advantage she needed to look fantastic. 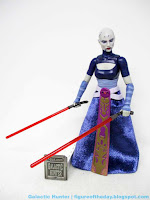 The head matches her look on the 2008 episodes of the show, with printing on the front and the back. I have no idea if the head is modeled after any specific person or was just cobbled together to look more or less like on the TV show. With a clever use of shared tooling, I think this figure is going to be a big hit. I expect Hasbro will want to make sure she keeps coming back so fans can get her - the kids of 2008 are growing up and probably don't even know what they're missing. This is going to be a gem, and is one of my absolute favorite figures in the scale so far. Get her if you see her.