Bio: A gifted warrior, Bo-Katan Kryze is a legendary Mandalorian. She refused to align with the Empire’s occupation of Mandalore. (Taken from the packaging.) 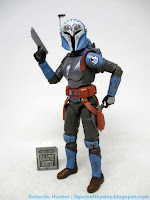 Commentary: You're going to want to buy Bo-Katan Kryze in her first-ever action figure form, but you're also going to want to get a version 2.0 if Hasbro puts one out. It's good - if this is the only one we ever get, you're probably going to be happy with it. Having said that, the colors are just a bit off with a couple of sculpting changes from the costume on the show that customizers are going to be altering this one. Provided they can find one, of course. I assume the figure may have been developed prior to the finalization of the costume, which means you've got a very good - but not exact - representation of the character from the small screen. 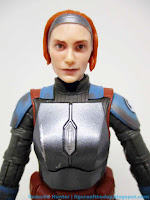 Given her appearance on the second season of the show, it's a real shock to have a figure. With all the secrecy, I would've assumed an animated version would come first. There are countless changes from animation to live action, with different colors and a few changed elements from her animated debut. This figure is pretty darned close to what we saw on TV last year, with 27 points of articulation. Other than the segment of armor covering her bely missing three grooves that you can see in the actual costume, the sculpting seems pretty spot-on. Her shoulder pauldrons look a little more angular on the show, whereas the final figure's are rounded. Everything else seems to be where it should be, with knee pads, gauntlets, and the Nite Owls logos you've come to love and expect. Her hair is a separately molded piece - which means the color shouldn't scrape over time - plus her hips can actually swing forward enough so she can sit in a chair. The range of movement is excellent given she has rubbery holsters hanging over her hips, and I had no problems getting her to stand or interact with her accessories. 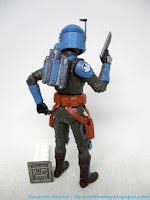 Deco could use some work. You can see the scrapes on the helmet don't look particularly natural, and the black "wear" on the blue armor doesn't quite look like the TV show either. The figure completely lacks the lights on the wrist armor, and there's no silver scuffing either. The color is a little more muted in the blue spots, and her belt seems more saturated than the on-screen counterpart. The belt deco also seems a bit off, but it could just be the lighting. I think there's room for improvement on the helmet too, with painted detail not standing out quite as well as what appeared on TV. It's by no means bad - if you didn't compare it to a reference image, you'd probably assume it's nearly perfect. 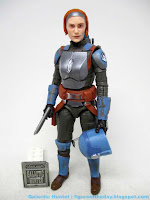 I don't know why Hasbro has been so hesitant to pack Mandalorians in more cases and at higher ratios, because people want to buy these things. I don't think any of the characters from the new show - or reissues like Boba or Jango since it started - have been available in anything remotely resembling ample supply. It's a thrill to see new ones, and hopefully you can find this one. Hasbro can certainly sell a few more, and it's good enough to track down if you have the means. If you're reading this in the far future and there was a superior redeco, I doubt you'll need this one too - but for the only game in town? It's great.

I'm all for more Mandos in the stores and with the show in full swing we should be seeing more. I like the looks of this character and her figure. Pretty cool and I'll definitely be picking one up when I can. Good post.