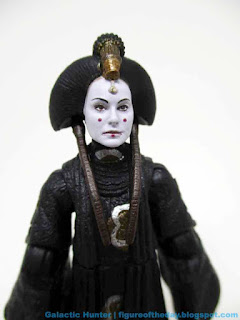 Bio: Padmé Amidala, also known as Padmé Amidala Naberrie, was a human female senator who represented the people of Naboo during the final years of the Galactic Republic. (Stolen from Wookieepedia. Packaging has no bio.) 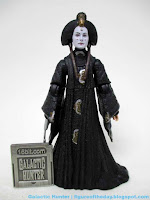 Commentary: The current era of The Vintage Collection splits its time between repaints - a lot of repaints - and the occasional retool, part-swap, or the even less occasional new release. Queen Amidala is a reissue of a figure from 2012. I was pretty unexcited when I reviewed Queen Amidala [FOTD #1,816] almost nine years ago - and it's pretty much the same figure with new deco. There's not a lot going on here, and the original was just fine. The 2021 version is better and cheaper (when compared to the secondary market), and as Hasbro has selected characters due to things like available tooling and fan interest, it makes sense that we'd see a wide variety of characters that long-time fans have and don't want to buy again.

Gown deco was slightly revised, but the main selling point is the head. Hasbro has done countless really good head sculpts that have been done in by their factory budgeting limits. Sometimes Hasbro would crank out an amazing Anakin sculpt with an off-color skin tone and weird eyes that, in the hands of an artisan, could look excellent. With Padme here, they deployed their fancy printing tech and you can see the dots from the printing around her hairline to give the make-up an added sense of realism. The eyebrows and dots are finer, and the eyes are eerily lifelike. The eyeliner is almost hard to see, but it makes her peepers pop quite nicely. While I am not terribly excited for more reissues, deco like this does show us why Hasbro might want another crack at some of these figures. Sure, it's easy money if the tooling is available, but you also get a nearly perfect likeness on a head the size of a peanut. That's impressive. 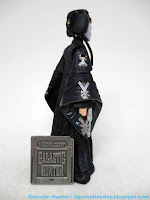 The gown was mostly black before, and it's black again. Metallic highlights are a tiny bit sharper and more muted, so you may prefer your original. I like the silver and gold elements a lot, but the figure's sides look more interesting than the front and back. The sleeves are ornate with big patterns painted on them, while the front obfuscates them under the swishing robes of her garments. It's almost a shame she didn't come with some solar-powered base which could spin her around so you could see the design work Trisha Biggar and her team put in on these stunning prequel costumes, but such is life. Also nobody seems to want that.

The first release of this figure was scraping fifty bucks, so I can see why Hasbro thought they should run more. But even if she does look amazing, she's not fun, and in the current era the prequels largely seem unimportant and ignored. As there's no complete program - her wave was something of a grab bag with a TIE Pilot, an Attack of the Clones Anakin, and a Battle Droid, it doesn't seem like a great jumping-on point or a place where buying the full wave seems rewarding. But if you missed her before, and want her now? This is great. I don't assume Hasbro will ever have a need to improve this release because I can't imagine a better head sculpt or deco in the coming decade.