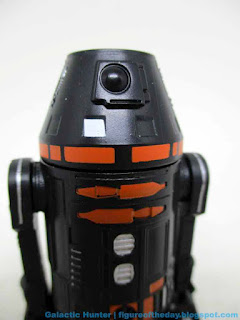 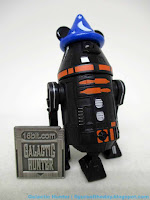 Commentary: I am keeping a series of Repaint Mondays going with the R0 Series Astromech Droid dome in black. There was also a white one which I can't remember reviewing (or at least, search isn't letting me find it as I write this.) This is a bin robot - not to be confused with a dustbin robot - so you could have fished parts out of compartments at Disney parks to put one like this together. You could've also done mismatched parts - but why? In 2015, the dome was the only new part, as the droid body and three legs were existing parts in existing deco which had been around for years. Unless I am mistaken, this is the only R0-series droid to have its dome appear in the bins to date.

Since the droid body itself is nothing new, as we looked at it with an R5-Series Astromech Droid Black with Silver and Orange [FOTD #2,181] back in early 2015. The supposedly non-Hasbro build has the no-wire legs so there are no rights or lefts - just get two and you're all set. The central black leg is unpainted, but the bigger legs have marvelous silver panels on the feet and festive orange dots. It's also a perfect match for the R0 domes, which as far as I know didn't exist until the Disney assimilation of Lucasfilm. 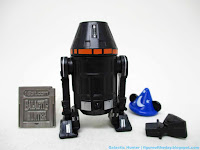 It's a new dome - it has a conical shape, cutting the top off so it looks a little like an R6 or an R5 unit, but not really. It's like R2 got smooshes with the same eye-in-a-square , with different silver elements from the R5 dome on the sides and back. There's a string of lined panels around the neck, and a white box under the eye. There are also four painted "pie slices" on the top of te dome. It's nothing too fancy, but it looks good and is a perfect match for this specific body.

It's a nice droid, but you can get the same body with R5 or R2 heads as well. They all look rather similar, and while cool I don't know much about the R0 domes. Are they really old? The naming conventions would make me think they are, but Microsoft also put out the Xbox One after the Xbox and Xbox 360 - so perhaps it's the latest and greatest in the Age of Resistance. I don't know if there's any literature on it, as the online resources have been somewhat unhelpful. Maybe we'll get an answer if he cameos on one of the TV shows somehow.

As the R0 units have virtually no movie appearances , I can only assume this is meant to be Poe Dameron's droid from The Force Awakens - I don't remember seeing the body, but the dome is in there for sure and it's a very close match. I assume we won't ever get a carded specimen, so if you have the means you should probably just grab one and cram it in one of your many X-Wings. Sure it'll be the wrong X-Wing - I can't fix everything. I like this droid, and at this point I can't help but wonder if it's going to be one of the last brand-new The Force Awakens characters we get as a 3 3/4-inch toy a while. I am assuming that the new trilogy is going to have a sort of plastic exile for a while.