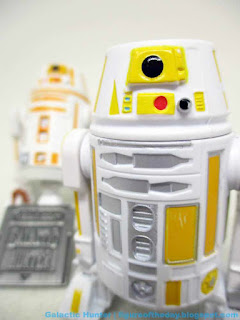 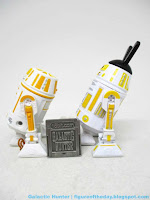 Commentary: I have a pile of un-reviewed droids, and they're unmarked as to what batches they came from other than "not reviewed." Good thinking on my part - so we're going to try to do Repaint Mondays from here on out to get them done this year. This R6 Series Astromech Droid dome is the second yellow one - there was one in 2012 [FOTD #1,889], and then there was another one in 2015. There are some obvious changes - 2012 is more of an orangey yellow. The 2012 dome has more areas filled in - the big tell is the one on the right of the droid's eye (your right, their left.) The top of the 2015 droid's "pie slices" on top of the head are not completely filled in like the previous release. The back of this droid has a green dot on the dome - this is not the case with the 2012 release. Both droids have three silver nubbins painted on the sides of the domes - the 2012 release is surrounded in white plastic, 2015 is painted yellow. 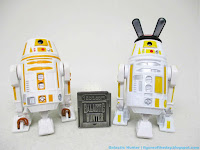 Since the figures were effectively spare parts in bins, the figure as you see it in these photos is just one configuration - we're identifying them by domes and heads, since there are more domes and heads than bodies. When this dome and the others from its wave were added, no new bodies were found - and unless my memory is failing me, this is part of the last batch of new parts going into those bins. (Which I appreciate, hunting these things down is a hassle for fans without friends willing to serve as a droid mule.) 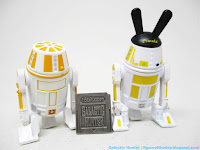 The dome is sufficiently different, but certainly pushes the "just different enough to make you mad" button. It's white with yellow (again), but with different panels painted you can see some differences. For example, the infrared receptors under the eye are tiny and green now, instead of the fuller red last time. To the average fan, it's just yellow - and that probably wouldn't be enough for anyone going through theme park parts to realize there was even a change without being informed of it prior to a park visit. How annoying is that?

I requested this configuration be built because I wanted the dome to match the body's unique yellow hues. You may want something more exotic, but I like it when the droid looks like it was either meant to go together, or some weird horrible accident. I went for the former. The parts all pop off, so you can rotate the dome, remove the legs, and then lose them because you've got too many things to keep track of these days.

The droid has an optional hat - mine had Oswald the Rabbit - but you can mix and match to your liking if you can ever get back to the theme park. On eBay I've seen a few of this exact configuration go for $25-$30, which isn't bad if you're only planning on getting one robot - shipping, parking, and such considerations are well worth the $10 to me. For one figure. But if you want them all, you might want to consider other options or someone willing to do you a favor, or a big trade. Given this droid doesn't really appear in the films, it's pretty much just for people who are droid completists. There are other R6 droids for you to buy, but at this time all of them have been exclusive to Disney theme parks.

Great job with this column, btw. Long time viewer, first time writer. I do hate it when I learn there's a variation I *hadn't* already had, but I have learned to live with that frustration. Ah well, back to Ebay.