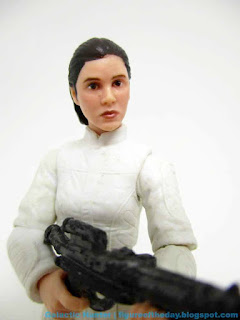 Bio: Adopted into the House of Organa, the Alderaanian royal family, she was Princess Leia Organa of Alderaan, a planet in the Core Worlds known for its dedication to pacifism. The princess was raised as the daughter of Senator Bail Organa and his wife, Queen Breha Organa, making her the heir to the Alderaanian monarchy.(Stolen from Wookieepedia. Packaging has no bio.) 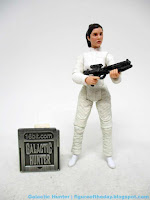 Commentary: The first - and previous - Princess Leia (Bespin Escape) hit stores in 2001. (I got mine signed by Carrie Fisher at Celebration II, behind someone named Tommy, who had the single best personalized thing I've ever seen on a signed figure. I'll never forget it.) But this new figure is somewhat surprising as a partial retool. So many elements are new, I assumed it was a redux of the Hoth Leia (2010 & 2020 redeco) but no! She does share parts - or at least digital sculpting elements - but there's a ton of new tooling here. It's not the same figure.

At first glance I just assumed this was the previous figure with a new head, no vest, and a couple of other tweaks. It looks like they went all out, but let's start with the head. We get a much better - if not particularly emotive - Carrie Fisher head with the hair loops from the end of the second (and best) film. The face printing really brings her to life and her skin tone is, unlike the 2010 Hoth Leia, lively. She looks like a tiny plastic person, which is what we want. The eyes glisten, there's a little make-up, and the hair is a separately molded brown piece that just looks perfect on my sample. (I hear some have a gap, mine did not.) Like Target's 6-inch figure in this costume, this Leia is exquisitely good and the head will make you mad Hasbro reissued any existing figure. You're going to want new heads for all your Leia figures now. 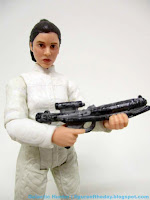 The body seems inspired by the 2010 Hoth Leia figure with a lot of changes. The front of the torso seems nearly the same, with a new back featuring more sculpting and wrinkles. The arms were retooled for the gloveless hands and other elements were removed, with the shoulders now seated in the torso better. The lower torso/butt area seems to be a holdover, as are the thighs - but the thighs were retooled to have copyright marks and some other alterations. The lower legs are new, and she now has ankle joints. They're not rockers, but take the ankles you can get here people. Hasbro made almost a completely new figure while making us think this was just a simple retool - it's kind of amazing. They fooled me, this is way better than what I assumed we were getting from the previews.

Articulation is improved from 2010 Hoth Leia, but not by a lot - the new legs mean ankles, and that's an improvement. The leg articulation is good and she was clearly engineered with sitting in mind - which is what your Millennium Falcon wants. The wrists and elbows are nothing special, and the head/neck has that barbell joint that allows for a slightly better and more human range of movement. She's good - she's like a slightly-better 2010 figure, but not as good as the modern ones with thigh cuts. I wish Hasbro engineered a wholly new figure, but this one does the trick.

The blaster has exceptionally good paint weathering, possibly making it the best Stormtrooper blaster deco I've ever seen - but it does seem a bit exaggerated. It's better than the last one - she came with a pair of gold blasters. This Leia has no problems gripping the gun, and I consider it the best one you can get in this size. You've got two total options, and the previous one was very good too. If you see her - a 1-per-case shortpacked figure - you should buy one or two. I think she's amazing.

Why tease us, Adam--"single best personalized thing I've ever seen on a signed figure. I'll never forget it." I'm asking with cream and cherry on the top, what was it? Thx!

I second that, though knowing something of Carrie's character, it is likely completely scandalous!

Mine is on the way!