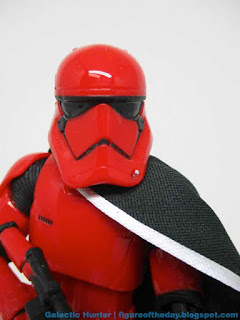 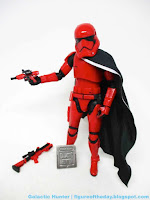 Commentary: Timing is everything. The rapid-pace drop of new films in the sequel trilogy plus the endless barrage of new publishing, theme park attractions, and the declaration of everything being canon to the point where it could well be sarcastic made the debut of a lot of things - like Captain Cardinal kind of underwhelming. Then again, maybe it's me - if we got a red Stormtrooper with a cape in 1992 I'd probably be doing cartwheels. A $5 upcharge for a flimsy cape on a trooper mold I've been sold a dozen times after Hasbro got its investment back is, to say the least, underwhelming in an era where other aspects of the franchise are quite popular. This isn't to say it is a bad figure - it's just a curious choice to release this as part of a theme park line, when I have no idea if the character appeared at the theme park, but I do know I haven't read any of the novels featuring him. It's a curious thing of which to make a figure, but also an exclusive Hasbro helmet for a hundred bucks. 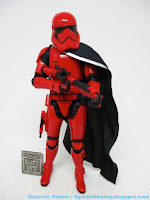 There were no visible improvements on the figure over its source material from 2015. Having been released in an individual box multiple times with varying accessories, pauldrons, or other elements, the First Order Stormtrooper is a proven seller. The articulation here is the same as what you got for The Force Awakens with a pointy mouth from The Last Jedi redesign. It has the vent on the helmet. You can plug the blasters in the thigh slot, which is a cool feature. I even rather like the shade of red they used here.

Cardinal has no problems holding his blaster, and he stands well. The cloth cape is supremely thin, but hangs nicely. The flimsy black sheet has a painted silver stripe, and if you don't look at it too closely you could say it's one of the better ones. At a bit of distance, it hangs nicely and is a decent enough thickness where you can understand why they opted to go this route rather than a more expensive solution, like retooling Phasma's plastic cape. (They could have probably also just sold us a red Phasma.) The figure lacks the shoulder enhancements we saw for The Rise of Skywalker's newer toys, but hey, it's a trooper. It looks cool. Unless you're a fan of the "canon" outside the stuff that appears on the screen, this character probably means nothing to you. It's just a nifty addition to your First Order ranks that will probably be best known as a Target exclusive. It's on-brand, after all, being red and everything. 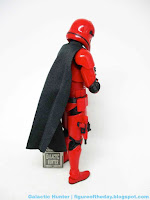 For the completist or hardcore collector, it's a pretty decent figure. But $25 could also get you The Horrors records, or Walmart's much more interesting 2020 The Clone Wars redeco and retooled exclusives. It's almost a shame that Hasbro has completely dropped the retailer branding on exclusive products in the wake of the death of Toys R Us - a Target logo on the box would arguably make this a much more fun figure, just as a store mascot. Well, there's always hope for more - maybe we can get Red Bumblebee or something to go with Red Wing and presumably some sort of Crimson Guard at some point.