Star Wars Figure of the Day: Day 2,792: The Child (The Vintage Collection) 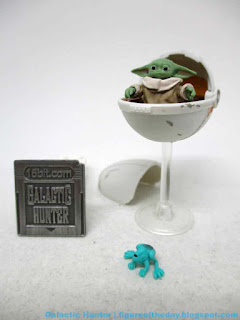 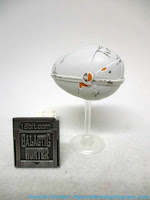 Commentary: After debuting in The Vintage Collection as an accessory for a marvelous plussed-up Mando a few months ago, Hasbro released The Child by himself - with the floating pram, season one deco. While Boba Fett is $12.99 and worth it, this is not. If you just want the figure, you're going to pay whatever Hasbro asks - but it's important to remember that The Black Series Grogu was ten bucks, and the pram isn't that much plastic. 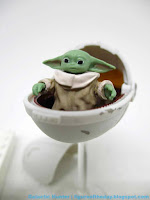 The figure is by no means bad - but this is an $8 figure tops. The tiny 1-inch figure has 3 points of articulation with a different head than his Walmart exclusive version - and seemingly different from the Razor Crest pack-in. He's cute, and his ears are down a little for this release. There's a hint of the white around his eyes. The ball-jointed shoulders are a clever design for the scale, plus he has a foot peg hole for some reason. The robes are wide enough that you'll likely never need to use a display stand with him, but it's nice to have options. I like that the collar and sleeves have the lighter color fabric around them, but there's not much here. It's four pieces of plastic and a tiny bit of paint, making it less complex than a typical 5 POA figure at a substantial mark-up. But he's cute, so you're probably going to pay it twice so you can keep one on the card. 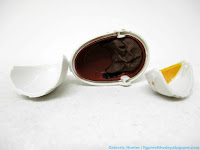 His accessories are fine. The cyclops frog looks like the bigger one... it's just tiny and one of the smallest toy creatures in this entire line. On its own it may not seem impressive, but considering that 20 years ago Hasbro was telling us how they're engineering figures to have hands with fingers spread-out and engineered so they won't snap off, it's amazing to see something this small with fully-realized limbs. As a child, I would assume a figure like this would have a base molded to it and the legs would be part of a large blob - this is really well done. It's a shame it's so small and not very colorful, because clearly some work and engineering went in to making it look good for the size.

The pram, out of the box, is substandard. The 2-part lid doesn't quite fit in the base without warping, and it's possible boiling water or a hair dryer could fix it but I haven't tried it yet (nor should we have to.) Things like this need to fit perfectly, otherwise they can't close. It's a little light on deco - the three squares in the front are unpainted - but you do get some orange marks and some simulated scuffing. It's OK, but I wouldn't call it impressive. For $13 I would expect a better form fit or even an alternate pram that's permanently closed. It's a clever design, but since it can't shut well I won't say it's particularly great. I'm sure this more flexible plastic was used for safety purposes - otherwise this thing could shatter of you dropped it funny.

The figure was previously sold as an accessory, and it's possible that was the best way to get him - as a $5 extra, he's a delight. (And still seems expensive.) At $13, it's far from the best bang for the Baby Yoda buck - those collectible figures are bigger and cheaper. The 6-inch scale figure ain't bad. There's a figure that was a full 6-inches tall with marvelous glassy eyes for $20. Because fans demanded it, I am happy Hasbro produced this release - we would not stop asking for it otherwise. Now we got it. Now we can move on.