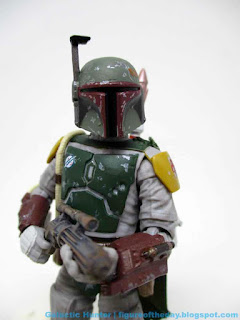 Bio: Fett was one of the most feared bounty hunters in the galaxy during the reign of Emperor Palpatine. He became a legend over the course of his career, which included contracts for both the Empire and the extensive criminal underworld. (Stolen from Wookieepedia. Packaging has no bio.) 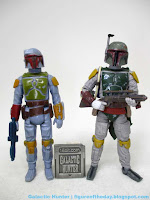 Commentary: Something new and almost perfect! It's rare for The Vintage Collection to put out new stuff. So many fans approached Hasbro at conventions in the mid-2010s and said "We want anything on a vintage cardback!" and for nearly four years, that monkey's paw wish has delivered a slate of reissues, parts-swaps, retools, and precious few all-new action figures. We've received precious few all-new sculpts since Rogue One introduced thigh-swivels to the line, so when you get a all-new figure like this Boba Fett it's time for celebration. While not the best toy Boba Fett - arguably, that may be the ForceLink one from 2017 with its simple joints - this is the one all the collectors are going to want. Hasbro took a lot of notes to bring us this gem, and you owe it to yourself to get one. Replace that 2004 Original Trilogy Collection "Vintage" figure, and get this one now. 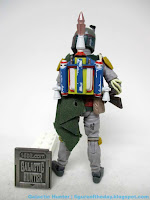 The figure seems to be a complete redesign, with all the bells and whistles. The last 100% new Boba Fett figure with super-or-better-articulation was around 2008 in the Evolutions pack, at the time the very best (and unmasked) take on the character which served as the basis for most The Vintage Collection rereleases up until last year. This new one adds things like rocker ankles, bend-and-swivel wrists, deeper cut elbows, and thigh cut joints that we've never had on a Boba Fett of this size before. By my count, you've got about 28 joints - 28! While I understand the griping about some figures (cough cough baby Yoda) being this same price, Boba Fett is something of a marvel. In December of 1995 we were reunning around like crazy people to get a pretty good (and the only brown-gloved proto suit) Boba Fett in the entire modern line for $4.99. Adjusted for inflation, that's about $8.60, and this new guy is around $13. Considering you went from 6 joints to 28 with added deco, a painted blaster, and a cloth cape, what's not to love?

While by no means perfect - this style of hip joint isn't great at swinging forward, and the writs gauntlets aren't jointed (but the wrists are) - it's better than you can reasonably expect for a figure at this size. The elbows can bend more than 90 degrees, which means they're taking some design cues from the 6-inch figures. Most Boba Fett figures can't even get to 90 degrees. He has no problems holding his gun, but getting some of the action poses just right may take some work. I was impressed by his center of gravity and didn't have much difficulty getting him to balance, but more impressed by the well-hidden waist joint which actually looks like a natural seam in the costume. Similarly, the other joints also merge nicely with the figure's natural costume design, which was a gift to toy designers looking to hide points of articulation.

It's missing one thing - the chest armor has had two horizontal lines, like an equals sign, on it since day one. The old Kenner toy has them, but this one lacks the grooves or painted representations of them - and may be one of very few Bobas to lack them. I hope there's a deco variant (or a mold variant) to slap them on there, because they were on the digital prototype render.

Deco is no slouch either. The helmet is almost perfect - mine has the tiniest seam at the border of the red on the helmet, but wonderful stripes, damage, and other silver markings. The decals are here, the backpack is colorful, the gloves have two colors on them, the hoses bend better than before, and the wookiee scalps still look great. The cape is nice and doesn't get in the way either. If anything he might be a smidgen more saturated in spots, but I'm OK with that.

He has one blaster, given a but of a dirty, dusty deco and a removable backpack with an unusual, unique peg shape. It's super-tight and fits in well, making it a bit less of an eyesore than the t-slot from 1995 or the falls-off peg from 2008, which leaves it unable to be mounted in the Slave I vehicle. (Unless they retool that again.)

This may well be the best one we get for years. With numerous redesigns from The Book of Boba Fett and The Mandalorian presumably on the horizon, Hasbro wisely invested in a new design they can probably keep selling for quite some time. While the rangefinder isn't jointed, it's otherwise going to be the best overall Boba Fett you can buy on the market today. If every figure from The Vintage Collection were like this - that is, a post-2018 all-new sculpt - I think fans would be a lot happier about buying the same characters again and again. This is a gem. If you only buy one figure this year, this may be the one you should get. Had Hasbro started redesigning their 3 3/4-inch line to this level of quality a few years ago, maybe we wouldn't have gotten (or needed) The Black Series 6-inch line. It's just that good.