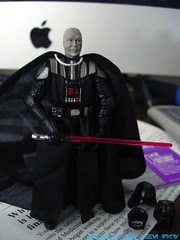 Commentary: Complain as fans do-- frequently-- Darth Vader is Hasbro's most bankable non-trooper character from the movies. If they want to make sure they have a repackaged figure in a case which will sell, this is the one you want to keep cranking out. I'm actually really surprised Hasbro stopped shipping him in the cases by early 2011, as they could just change the logo and swap the cardback photo and sell another 30,000 pieces. Easily. But anyway.

The figure is the same body as the 2005 Evolutions Darth Vader, which has been the basis for numerous versions of the Sith Lord since then and remains Hasbro's best non-Star Wars-specific version of the character in toy form. He can stand and sit well, he has cloth elements so he can actually pilot a ship, and the armor sculpting is really great. The "new" elements of this figure are largely in the head-- specifically, the face and helmet. In 2008 Hasbro redesigned the mold to have a 2-piece removable helmet (a dome, plus a lens piece that comes off.) This time around all 3 pieces are removable, so if you pop off the head you can actually see a sculpted chin and mouth under the rebreather portion of the helmet. It's a really cool detail, but it's kind of bad as a toy. You see, when you have removable parts, they sometimes fall off. The dome doesn't stay on really well, and Hasbro hasn't had a new Darth Vader without a non-removable helmet since 2005. (It's time to go back to basics.) The sculpting is great, and the Sebastian Shaw likeness is... well, it's OK, but the deco is still in need of improvement. At the end of Return of the Jedi, Darth Vader had these huge rings under his eyes and lots of color surrounding his very pale skin. This figure is a sort of zombie grey color. Hasbro: you can do better. If you're going to give us another run of this guy without a glued-on helmet, please make him look more like those last few moments of Return of the Jedi. Or the Darth Vader 2.0 Mighty Muggs figure, or the second Darth Vader Unleashed action figure, they both nailed it.

As you can see in the photo, there's a nasty paint glitch on the figure-- and every loose sample I've seen so far. The chin has the paint scraped off it, giving it an extra-ugly appearance. Basically, it looks like Hasbro missed a spot. I've heard some fans say they believe this is an intentional move on Hasbro's part, but I can't help but think this was unintentional. It just doesn't look very good.

For collectors, this is as good as it gets right now-- but it still needs work. After all, his hands aren't very good at holding his lightsaber, the belt does not have a place to hang his lightsaber, and, again, the dang helmet won't stay put.

Collector's Notes: Despite complaints, this figure was always one of the ones that sold out really fast-- non-collectors will buy this one. Right now you're unlikely to find one in the wild, so good luck. I heard people complain it was over-shipped, but eBay says it's worth $15. The new Cloud Car Pilot can't claim that.

Email ThisBlogThis!Share to TwitterShare to FacebookShare to Pinterest
Labels: Darth Vader, Empire, Return of the Jedi, Sith Lords, The Empire Strikes Back, TVC