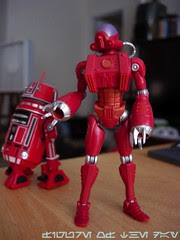 Bio: L8-L9 was a prototype battle droid built by TaggeCo during the Clone Wars. The droid was created in the utmost secrecy, and was part of a ploy by Baron Orman Tagge to gain favor in the sight of Palpatine. (Stolen from Wookieepedia.)

Commentary: With about 14 joints, L8-L9 is an obscure character lover's dream. Hasbro got pretty obscure pretty quick in its build-a-droid offering, bringing in rarely-seen R7 astromechs alongside the likes of this droid glimpsed at only briefly in a giant arena battle royale. This is one of those figures I like to cite when a fan complains Hasbro never does anything good for collectors, when I should just punch that person for being a pest. The red robot has holes in his palms which can "shoot flames" with clear attachments, a really nice touch and a distinctive weapon. Like most figures from this line, he has a great range of movement and can actually sit fairly well or be posed nicely, despite all you really need him to do is to stand and aim at combatants. As the number of figures based on the 2002-2005 TV show are few, I'd give this one a strong "buy" rating along with the Battle Pack Asajj Ventress and the 2011 ARC Trooper Commander (Fordo). This is a release as great as it is obscure, so if you care about good figures you should get one of your own. (And if you get the entire Phantom Menace wave of figures you had to buy to get the components, do that too-- most of them were great!)

Collector's Notes: All build-a-droids were one-wave wonders, as the parts were immediately retired as the next droid bits were introduced. A complete droid sells for $8-$10, quite a deal considering just how weird this one is. While a blue deco exists in the Expanded Universe, Hasbro has yet to make a figure based on that design. Were I a betting man, I assume they never will. If you're a sucker for obscure toy lines, the pegs on build-a-droid figures are very similar to Onell Designs' Glyos figures, if you're looking for limbs to plug in to the bodies.

I put two sets of flame arms on him and made him a rocket dog.