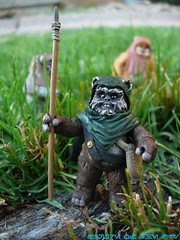 Commentary: The original 1998 Wicket sculpt did Hasbro (then under the Kenner brand) a lot of good, as numerous figures were tweaked versions of that design. While not bad for a generic Ewok, the mold wasn't really ideal for Wicket as he was really big and kind of funky. This new one is more appropriately sized, with more articulation and gear. It also costs about three times as much as the 1997 release. Such is progress! The new figure is an entirely new sculpt with nine points of articulation-- but it's worth noting the hoods restrict the neck movement a little bit. The very fuzzy sculpt is augmented with a lot of paint, and the face paint seems more dirty than it does seem true to the creamy fur on the face of the movie suit and original 1984 Kenner figure. He's no slouch-- the body is unquestionably better with so much more movement and detail at a more compact size, if Hasbro repainted the face I wouldn't complain when the variation hit.

What makes this figure really special-- more so than the wrist and ankle joints-- is its gear. The spear is nice and everything, but Hasbro decided to give children of the 1980s a treat by including a second hood. The primary one (as worn in the package) replicates the garment from Return of the Jedi, while the green hood and pouch are inspired by the second season of the ABC-TV Ewoks cartoon from roughly 1986. Rather than having a "bib" hanging down over his belly, the animated designs for Wicket, which were also used in a number of coloring books, valentines, and other merchandise, sported a cape. Granted, most of these used a tan or brown color, so the green one is a genuine treat for fans of the show, who know it's meant to be from the year that Ewoks saw a change-up in its voice cast and animation. I applaud this weirdness. It also leaves the door open for an orange or brown "season 1" redeco down the road, minus the pouch. (Hasbro: that's about as subtle as my hints get without labeling them. [Too late, sorry.])

Despite the price, I like this figure. It's weird-- at a retail store, paying $9 for arguably the best Wicket toy we'll ever get seems like a stretch, but if Hasbro put the very same toy at Comic-Con as an exclusive for $20 I'd pay it with a smile. Weird, hunh? I really dig the nod to the cartoon, as very few of these have been made in the modern line's rapidly approaching 2,000-figure run.

Collector's Notes: This figure sold pretty well and shipped from Hasbro as late as July 2011, if not more recently, as you are in the future. The price is creeping up on eBay, but that may be in response to rising prices at retail. I'm going to guess it'll go up over time due to the cartoon accessory, as even if this figure gets reissued down the road, I can't imagine they'll include the same season 2 gear again. So pay the $9 and get it over with.

Email ThisBlogThis!Share to TwitterShare to FacebookShare to Pinterest
Labels: Ewoks, Rebellion, Return of the Jedi, TVC